It’s typical of Kathleen Donahue, owner of Labyrinth Puzzles and Games (645 Pennsylvania Ave. SE), that when she is asked to talk about her efforts to help the community even as her own business suffers she deflects attention to others. She’s grateful to her customers for their concern and continued support. She’s grateful to Mr. Henry’s Restaurant, just down the street, for acting as a pick-up location for purchases from Labyrinth’s new e-commerce site, and to the Jason Martin Group, which selected her business as a beneficiary for their April 21st Tuesday Trivia Night fundraiser.

“Just having the businesses working together has been really wonderful too,” she said. “I just think it’s really great how the community is coming out to support different people.”

Donahue downplays how she and Labyrinth are also coming out to support people, even now while her business has been closed and revenue is down as much as 75 percent. Last weekend, she took an idea brought to her attention by her friend Anne Phelps and spearheaded an effort to gather more than 150 puzzles and games for children staying in the District’s family shelter system, run by the Department of Human Services (DHS).

‘A Story of Kathleen’

“It’s such a story of Kathleen,” said Phelps. “I’ll tell you that here she is, so worried about her staff –as she should be– and a business she’s poured her heart and soul into in this terrible time, and yet despite all that is immediately moved to action to do something generous for her community.”

Phelps had learned of the need for activities for the children living in shelters through a colleague working at DC Council and shared the need on social media. Seeing it, Donahue immediately contacted Phelps and offered to facilitate the donation, offering to acquire games at cost or to use Labyrinth’s Teacher Wishlist Fund, created to supply games to District teachers. 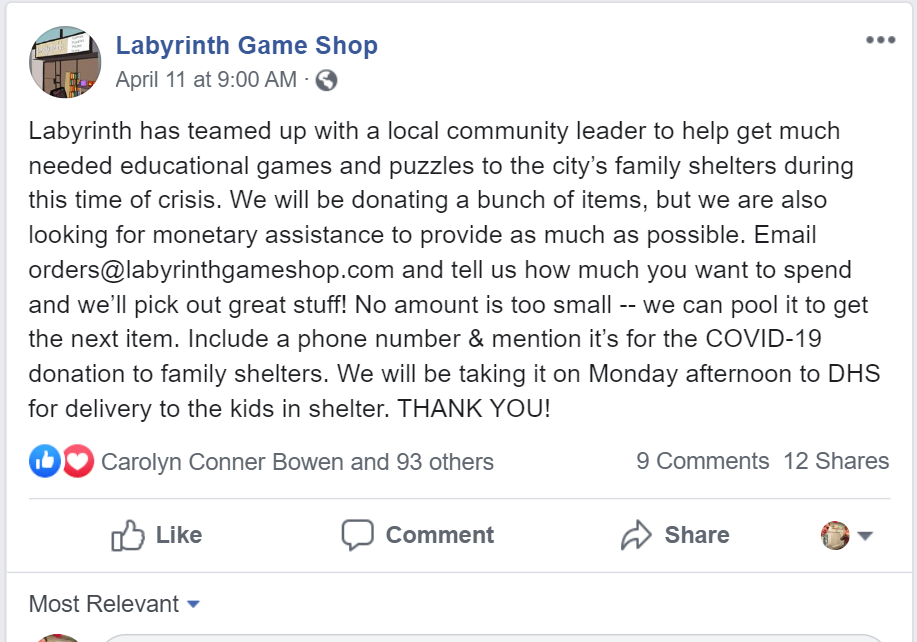 After Donahue posted about the need on Labyrinth’s Facebook page, Phelps said, it really exploded. “What was originally going to be sort of small but incredibly meaningful donation from a handful of folks turned into this enormous outpouring of generosity from a group of dedicated customers,” she said.

Originally, DHS had created an Amazon Wishlist to describe the kinds of things kids might need, but with inflated pricing as a result of recently increased demands, the regular prices at Labyrinth were better than those at the e-commerce giant. Customers donated more than $1,700, and Donahue used the funds to buy games at cost, stretching it to more than $2,000 retail and bringing three gigantic boxes of activities to Phelps so that she could arrange for DHS to get them.

The effort was a way to help people support Labyrinth as well as kids in shelter, Phelps said. “The galvanizing nature of Kathleen’s post and people wanting to help in some way I think it speaks to both the generosity of people,” Phelps said, “but also the loyalty people feel toward their local businesses.”

Donahue has been transparent about her fears for her business and her employees on social media. “We have 15 employees and I am absolutely terrified what happens to them if we can’t make it,” she said. “They mean the world to me, and I just can’t let bad things happen to them no matter what as long as I can figure out something.” 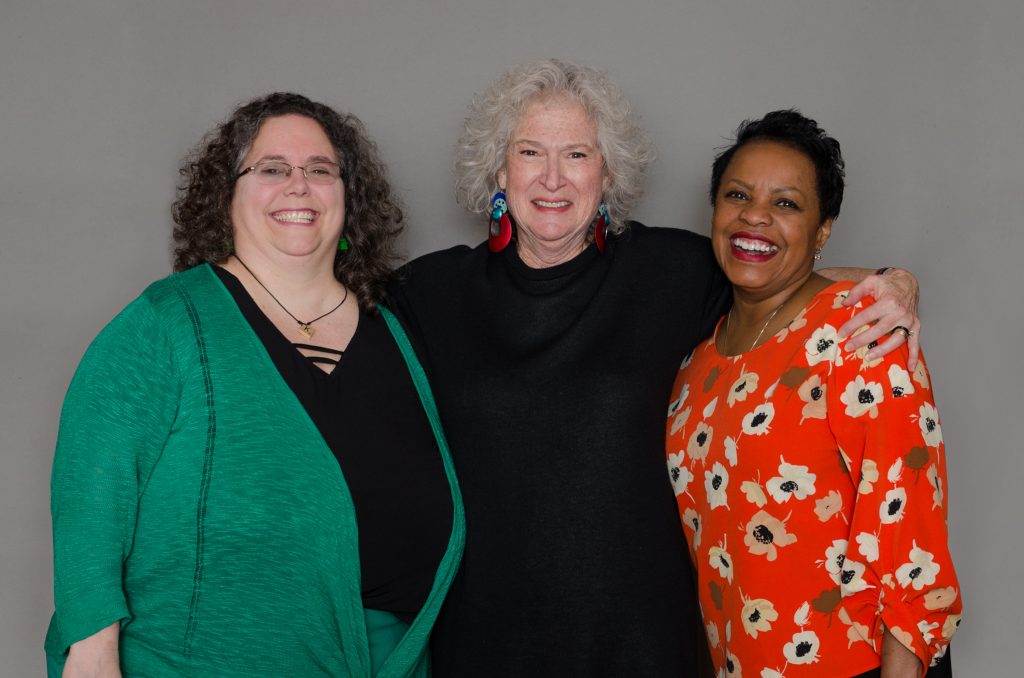 Kathleen Donahue, Bonny Wolf and Pat Joseph are the 2020 Capitol Hill Community Achievement Award recipients. Photo: Elizabeth Dranitzke/PhotopiaHowever, Donahue is unwilling to compromise her values, even amid the economic stress of the COVID-19 crisis. “When I started Labyrinth, I had some very, very strict ideals about what I wanted the store to be,” Donahue said. “I wanted it to be a very community space and I’m not going give that up just because we’re you know, 75% down on our income.” Labyrinth is still running online gaming, asking participants to pay what they can because she considers the community connections and support most important right now.

The Capitol Hill Community Foundation (CHCF), recognized Donahue’s role in creating community by honoring her with the 2020 Steve Cymrot ‘Spark’ award. Donahue said that she was sad that the gala dinner had been deferred to Spring 2021, but not sad that she won’t have to wear a fancy dress. (She has always joked that one reason she opened Labyrinth was so that she’d never have to wear high heels again. “I was really stressed out about that dress,” she said).

You can continue to support Labyrinth by visiting their new online store. Items can be picked up from Mr. Henry’s Restaurant (601 Pennsylvania Ave. SE), which in addition to offering takeaway food and adult beverages between 4 p.m. and 8 p.m. is also a pick-up point for Labyrinth’s neighboring business, East City Bookshop.