One such effort spearheaded by the Jason Martin Group, is not just fun and games –but it’s all that, too. The team of real estate agents have raised $13,000 for nine small businesses over three weeks by hosting online trivia. More than 728 people have participated in Virtual Trivia Tuesdays so far.

“We’re all looking for something to do. I mean, you can only watch so much ‘Tiger King’,” Coleman said, “But it’s also a great way to offer support. People are looking for creative ways to give someone like Trusty’s money, but there’s only so many grilled cheese stacker sandwiches that you can eat in a week.”

“This is a fun way where you can come in, contribute, have a fun time and then leave some money at the end. It’s a positive way to do it.” 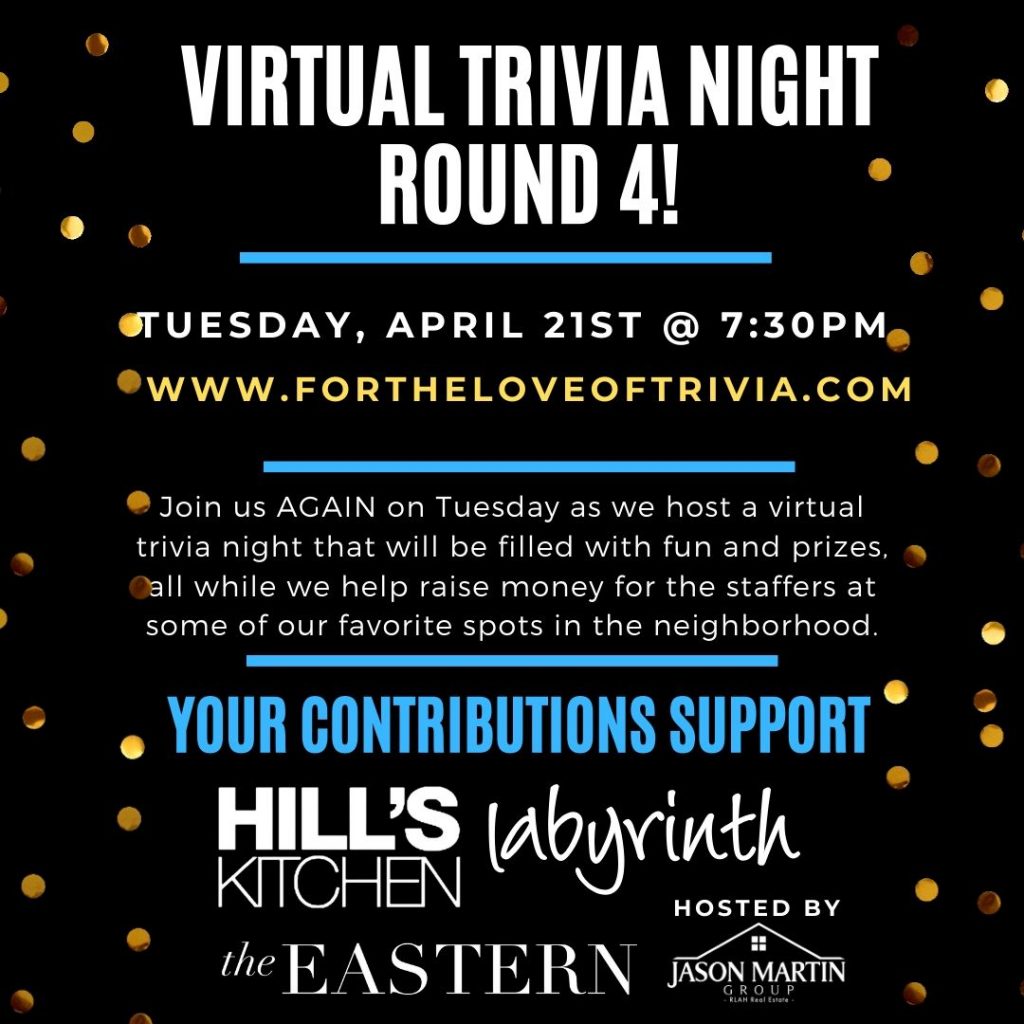 Coleman said the event was originally just going to be a one-time deal, a way for his friends and neighbors to stay sane and connected while obeying the Shelter in Place order. However, after Jason Martin Group decided to use the event to support local business, it evolved into an outpouring of community support for neighbors who have been impacted and he started to receive messages asking the team to do another, and another. Coleman said that the team decided that even if they raised half of their profits from week one every week thereafter, it would still be worth it.

“It’s always been our guiding light to partner with the people in the community. The people is what makes up the real estate business,” said Coleman.

Originally, Coleman selected businesses he had relationships with as partners for the trivia night, such as Trusty’s. He had met many through Coffee With Coleman, a weekly video series he hosts that highlights businesses on Capitol Hill. Now, he’s receiving suggestions from players –and even from other business owners.

Proceeds from Trivia Night have allowed businesses to keep some staff working and offer additional services to their patrons. “Jason Martin Group has been an amazing partner for the community,” said Adam Kelinsky, one of the partners of The Pursuit Wine Bar & Kitchen. “They’ve figured out a way to bring folks together at a time when people need connectivity and unification. It reminds us of the good times for a moment and offers a distraction from what’s going on around us.”

Kelinsky said the funds donated have allowed Pursuit Wine Bar to offer additional shifts to bartenders and kitchen staff. Other recipients like Trusty’s, which routinely hosts trivia night during normal business hours, has been able to remain open on Tuesday and Friday nights. The donations they received were placed in a staff fund to be accessed as needed by bar and waitstaff.

Now the project has grown more sophisticated. It’s hosted on gaming platform Twitch, allowing the team to integrate video, slides and music. Players sign up on Eventbrite throughout the week. On Tuesday morning, players get an email listing the partners and suggesting they enhance the pub-night atmosphere with takeout from partnering restaurants. About an hour before the game, they are sent a link to the stream for computer, fire stick or smart TVs. They also get a link to the answers form, which is filled out online as the quiz is happening and graded in real time.

Coleman said that putting the trivia event together is time-consuming, but it gives the team something to rally around, and a reason to keep moving now, while work has slowed for them as well.

“If this was just me there’s no possible way I could do it,” he said. He said members of the Jason Martin Group Team, especially Tim Holt and Mariah Henlsey ‘are the backbone’ in making it happen each week. “They’re the true brains behind making it happen; I’m just the guy who gets to drink a beer in front of the camera and read the questions,” he said.

The goal is to raise money for the businesses, Coleman said, but it’s also a place for the community to get together on Tuesday night. Neighbors can interact with one another, hang out and have a fun time. “It’s nice to have an activity that you can rally those Zoom calls around, and take the focus off what’s getting talked about in the news,” Coleman said.

The Jason Martin Group plans to host weekly Virtual Trivia to help other local restaurants every Tuesday at 7:30 p.m. as long as the players keep coming out. For more information or to sign up, visit www.fortheloveoftrivia.com