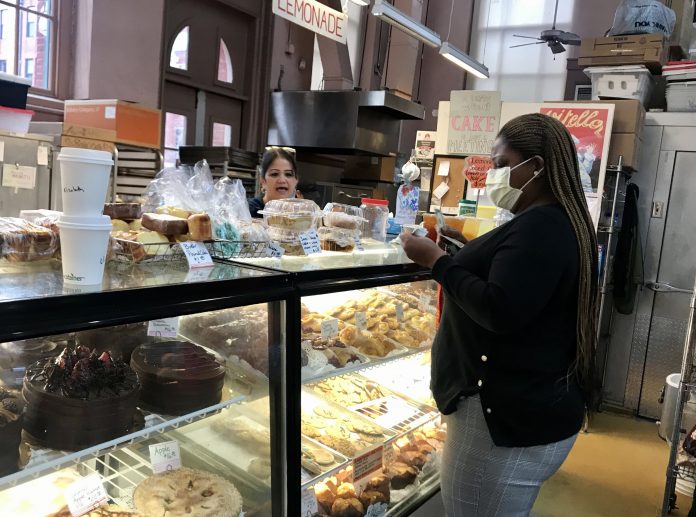 On Wednesday, the Mayor of Los Angeles Eric Garcetti, recommended that city residents wear face coverings to perform essential tasks. Issued the same day, the California Department of Public Health Face Coverings Guidance reminded Angelenos that “face coverings are not a replacement for other evidence-based measures such as physical distancing.”

On Tuesday, the Post reported discussions between the Center for Disease Control (CDC) and the White House about the possibility of issuing a national recommendation to wear face coverings to prevent virus transmission.

Masks are currently only recommended by the CDC for those providing care to people known to have COVID-19 or those with symptoms of the virus. In light of the recent reports, The Hill Rag asked a local expert if he thought the wearing of facemasks by people without visible symptoms would help to prevent virus transmission. Pedro Kremer is a physician and epidemiologist with experience fighting large-scale viruses, including the 2009 SARS epidemic.

Kremer said that there is no scientific basis for an answer. “There is no evidence whatsoever in terms of the general population using masks as a measure to avoid the virus,” Kremer said, “and the recommendation to use a mask in the context of the shortage is problematic.”

While wearing a face covering might seem better than nothing to many, he added, it may actually be slightly worse.

Kremer said that it is important to remember that CDC has not yet issued a recommendation. However, he said, if they do, it likely won’t be that people without symptoms start wearing a N95 respirator. Rather, it will be that people wear a scarf or a bandana over their mouths, as in California.

That’s for two reasons, Kremer said. First, they are in demand and critically needed for medical professionals and those providing care to patients known to be infected with coronavirus. Such a recommendation would exacerbate an already alarming shortage. “Those masks are supposed to be changed frequently,” he said. “Instead, medical staff are using them for hours, days even.”

Second, masks must be worn properly in order to function optimally, which means that it must be sealed to the face securely enough that the virus cannot enter or escape. Most crucially, he said, the wearer must not adjust it or touch their face. (Think of a television doctor preparing for surgery: after washing her hands she holds them up and out in front of her, like a masked t-rex).  “When you adjust it or touch your face, you start all over again,” he said. Touching surfaces, the mask and your face repeatedly will transmit the virus if it is present there, mask or not.

So, a CDC recommendation probably wouldn’t be to wear a mask, but to wear a face covering such as a bandana or scarf. Such a covering may make a difference, Kremer said, but it would be incremental. It might prevent the transfer of large droplets (like a sneeze), but it can’t filter the virus itself, he said.

Face coverings also may motivate frequent adjustment, compelling people to touch their face and so actually increasing the potential to transfer the virus via touch.

A False Sense of Security?

Kremer said although some counties have decided to go in the direction of face coverings, because of the lack of evidence, “this is one of those recommendations that comes in the way of not being proven to be effective, or not harmful.”

On one hand, wearing a face mask seems innocuous. But Kremer said that it might create a sense of false of security. “It’s not instead of best practices, such as hand washing,” Kremer said of face coverings. “This should be in addition to things, such as regular hand washing, not touching your face, maintaining social distance.”

At the Mayor’s Thursday morning coronavirus press conference, DC Health Director Laquandra Nesbitt echoed many of Kremer’s points when asked about the proper use of personal protective equipment (PPE). She said PPE should be used by certain individuals in certain situations.

“When we are making PPE recommendations, we make it with sort of like a fine-toothed comb and we give it to individuals based on their level of interaction with people,” she said. Sometimes face coverings are worn by an infected individual to protect others; sometimes people wear them with the ‘perception’ that they are being protected from infection by others, she said.

“So, there’s a lot of education that has to go into the use of face coverings –they’re not a benign device.”

Whether you choose to wear a face mask or not is a personal decision, but both physicians agree: it is not a replacement for other methods of prevention. You should still wash your hands, avoid touching your face, stay 6 feet or more away from people that don’t live in your household and stay at home except for essential reasons.

Verdict: if you wash your hands, don’t touch your face or covering, and keep it clean and dry –a face covering might make an incremental difference –but there is no supporting evidence, and an incorrectly worn face covering could become more of a hazard than help.

Connect with Dr. Pedro Kremer via Linkedin, NextDoor or via Twitter @pedrokremer. Get the latest on COVID-19 from the Centers for Disease Control (CDC) at https://www.cdc.gov/coronavirus/2019-ncov/, and from the DC Department of Health at https://coronavirus.dc.gov/

Comments on articles should be directed to [email protected]