“We are asking everybody to be a good neighbor and stay home,” she said. Just stay home.”

Bowser said Metropolitan Police Department (MPD) and other District officials would break up any group congregations they see, such as soccer or basketball games, and encouraged people to gather together only with members of their immediate family or household.

“We have basically closed down the District,” Bowser said, “The gathering places District residents can go to have been shut down. We want people to go out for essential activities only.” The mayor gave examples that included grocery shopping, doctor visits and dog walking.

At a simultaneous press conference, Maryland Governor Larry Hogan ordered the closure of ‘non-essential’ businesses beginning at 5 p.m. Monday, March 23 but also stopped short of shelter-in-place. Bowser said that businesses that could facilitate social distancing could continue to operate in DC, but added that the administration is constantly examining businesses that can adhere to social distancing guidance, and additional guidance could be issued on business.

MPD has been working with the National Guard to restrict access to the Tidal Basin since Sunday, when street closures in the area and a closure of the park to the south of Independence Avenue when into effect, a situation the mayor called ‘exceptional’.

Bowser asked people to stay away from the cherry blossoms in the area. “You will not be able to get access,” she said, noting that museums, restaurants and bars in the area are closed. She also discouraged people from coming down to walk or bike on streets closed to traffic, saying the number of people doing so was making social distancing impossible. Bowser recommended those wanting to see the cherry blossoms instead watch the NPS BloomCam.

Bowser said that the City Administrator is in planning discussions with NPS about other parks, such as the National Arboretum, where dogwood trees are expected to bloom shortly.

The press conference came the day after Bowser announced the city’s second death due to COVID-19. 116 positive tests have been confirmed in the District as of Sunday evening, including one member from MPD and 7 members of DC Fire and Emergency Services (DCFEMS). So far, 17 people who tested positive for COVID-19 are confirmed to have recovered.

Learn more about the District reponse and data on COVID-19 at coronavirus.dc.gov 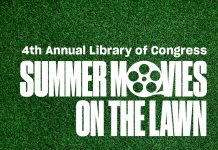 Catch a Summer Movie Outside Library of Congress

Vertical Gardening in the 21st Century