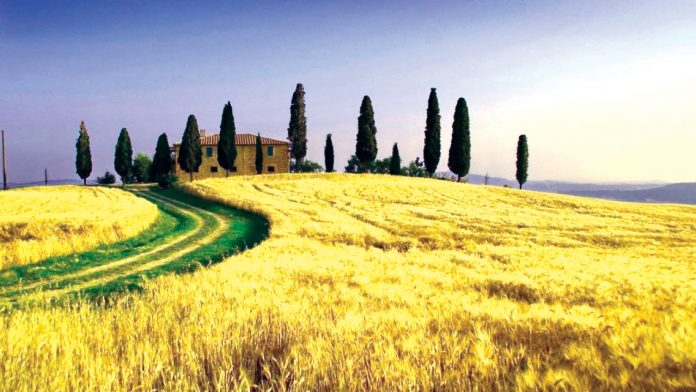 There are so many reasons to fall in love with Tuscany.  The stunning scenery, rolling hills, olive trees, delicious cuisine, historic art and architecture, the list goes on.  But what keeps us coming back to this picturesque countryside dotted with Cyprus trees is the wine.

Viticulture in Tuscany predates the rise of the Roman Empire.  The first exports of wine from Tuscany dates all the way back to the Etruscan period in the seventh century BCE.  Viticulture and wine trade have always been key to the economy of Tuscany.

There are many grapes grown throughout Tuscany, whites such as Trebbiano and Vernaccia, and reds like Canaiolo Nero.  But the signature grape of Tuscany, and the most widely planted in all of Italy is Sangiovese.

Typical examples of Sangiovese are ruby in color, with aromas and flavors of red cherry, red plum, violet and dried green herbs.  They are full bodied with high tannins and high acidity.  The best examples have the potential to age and improve in the bottle for decades. When mature, they develop rustic earthy flavors.

Most of the top growing regions produce red wines, with the exception of Vernaccia di San Gimignano, a historic white wine region, mentioned many times in texts from the middle ages. These are lovely white wines from the namesake town, a popular tourist destination known for its 14 medieval towers.  Vernaccia has aromas of wet stones, almond, pineapple, and citrus.

The largest wine producing region in Tuscany is Chianti.  They are released young, in March following the harvest, and aged in neutral vessels keeping the emphasis on the fresh red cherry character of Sangiovese.  These wines are less expensive than those from Chianti Classico, the hilly area between Florence and Siena.

The top vineyards of Chianti Classico are at higher elevations about 650-1,640 feet above sea-level.  Cooler temperatures contribute to a longer growing season allowing Sangiovese to fully ripen and retain high acidity needed for complex and balanced wines.  Special rocky soils called galestro and clay soils called alberese offer balance between good drainage and water retention.  Wines are released later than in Chianti with a minimum of one year and two years for Riserva.   Today, the style of wine from Chianti Classico emphasizes the natural characteristics of Sangiovese without the influence of international varietals like Merlot or New French Oak to mask the tart cherry qualities of the variety.

Another iconic Tuscan wine is Brunello di Montalcino, named for the historic town of Montalcino in southern Tuscany.  It is one of the most prized wines from Italy collected and traded all over the world.  The Biondi-Santi family is credited as the pioneer of the region; they were the only producer of Brunello until World War II.  A lot has changed since then and today there are 250 producers of Brunello up from only 11 in the 1960s.  The area is warmer and drier than Chianti Classico, and its proximity to the Mediterranean Sea provides cool breezes that preserve acidity.  This climate creates very full-bodied expressions of Sangiovese with lots of black pepper, red cherry, violet, cinnamon, and clove.

Winemakers wanted to offer something to drink while the Brunello was still aging so they created Rosso di Montalcino.  100% Sangiovese it is from the same area as Brunello, but it is released after one year instead of 5 years required for Brunello.  It is more approachable and an incredible value for the money.

A quality revolution in Tuscany started with the founding of Sassicaia in 1968 and Tignanello in 1971.  These trailblazers started the renowned category of Super Tuscans, elevating the prestige of the region as a whole. These wines are made from Bordeaux varieties like Cabernet Sauvignon and Merlot and are aged in small French oak cask, not the traditional botti.  This created an international style of deeply colored, fruity reds with lots of vanilla and sweet spice, from the small French barrique.  These are some of the most expensive and collectable wines in the world.

Elyse Genderson is the Vice President of Schneider’s.  Visit her at the historic storefront to discover wine’s you’ll love.