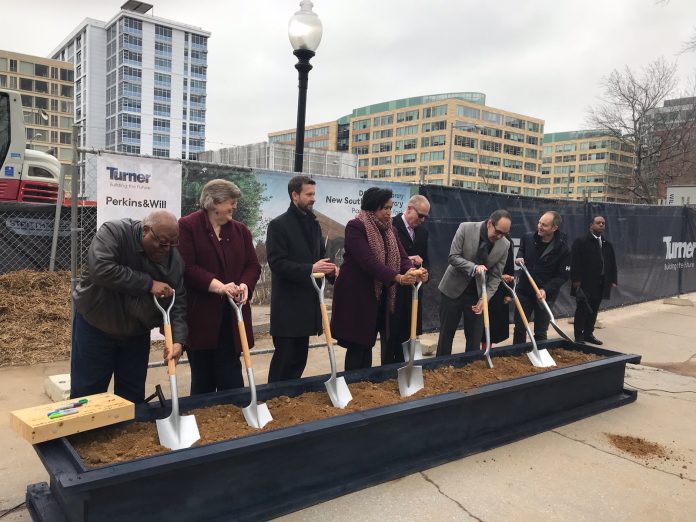 “This is exciting. This is a really big day for Southwest,” said Ward 6 Councilmember Charles Allen (D) just before he grabbed a shovel to assist in the groundbreaking for the new Southwest Library building, 900 Wesley Pl. SW.

After years of community engagement and advocacy, the fully-funded $18 million project was officially kicked off at a ceremony held the morning of Wednesday, Feb. 5.

Originally, the city planned to sell off the land and use the funds to place a new library on the second floor of a development slated for 1000 Fourth St. SW, next to the CVS. Both Mayor Muriel Bowser (D) and Allen paid tribute to the activism of the Southwest community in preserving a standalone library on the original parcel.

The building design  is ‘striking and respectful to the neighborhood’, and said this was due to the substantial community involvement, DCPL Director Richard Reyes-Gavilan agreed.

Allen thanked Mayor Muriel Bowser for helping him fund the new stand-alone library. The community for their work, saying that the city will be so proud of the facility they helped guide and build, said Allen, He gave special thanks to Georgine Wallace, president of the Friends of Southwest Library.

Wallace said she too was pleased with the direction the plans for the Southwest Library had taken. She thanked Allen for his work on the project. “It is very rare in this day and age when one can say, ‘I am so proud to be a constituent’,” she told him.

The new library features an environmentally sustainable design with solar panels and a green roof, and lots of natural light. At the request of the community, there will be more public space, including a variety of seating options and spaces for reading.

There will also be a large meeting room, capable of holding more than 100 people, three conference rooms for 12 to 20 people and three study rooms. The library will house an Innovation Lab with 3-D printers and space for children, teens and adults. It will also have an outdoor porch space.

“The new library will be a much-needed addition to the Southwest community,” said DCPL on their website. “It will be a place to read a book, meet with friends and host community gatherings.”

The name of the President of the Friends of SW Library was misspelled in an earlier version of this story. It is Georgine Wallace, not Georgina Wallace. The Hill Rag regrets the error.