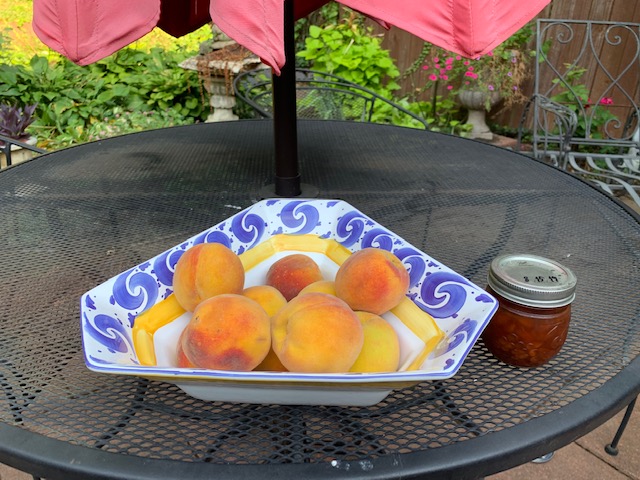 One morning earlier in this summer a peach tree branch cascaded to the middle of the sidewalk leading to our steps, evoking the cover art of Shel Silverstein’s The Giving Tree, which lovingly chronicles an apple tree’s acts of selflessness as a little boy grows up, navigates manhood and to weary old age.

That sweet sentiment was fleeting. “What combination of clippers, axes and saws would rid us of this of this massive weed,” I wondered. “Perhaps a severe thunderstorm will put an end to it this summer.”

This peach tree was no giving tree. It was more akin to the curmudgeonly apple trees that menaced Dorothy and the Scarecrow on their way to Oz.

When Chris and Katie Bond bought 7 Ninth Street, SE in late 2015, they were aware the tree’s chief talent for its first two years was growing madly in all directions. Living next door at #9, I was already a veteran of stooping and sidling my way through the jungle. Throughout 2016, 2017, and 2018 leafy tentacles brushed against window panes and batted pedestrians in the face, prompting occasional surgery with clippers, even a saw.

Home Depot sold it as a dwarf peach tree but after seven years Katie affirmed, “There is nothing dwarf about that tree.”

As for the peaches? For the first year or so it seemed to be barren. Years two and three produced plenty of hard, green, fuzzy nuts that hoped to be peaches when they grew up. However, word was out among the neighborhood squirrels. They climbed and pillaged, leaving pits stripped of fruit in the grass, walkways, and steps but not one peach for us humans.

Year after year, more peach wannabes, more squirrel detritus. It was the pits. Even so, the ritual was becoming a charming annoyance, a measure of predictable unpredictability in my personal man-versus-nature struggle. Oak trees planted on Ninth Street a mere decade ago are now so big they allow only shade-loving annuals to thrive in my yard. I adjusted. I could live in harmony with the peach tree’s gangly fruitlessness.

Chris, meantime, was determined to safeguard his peaches. He learned of organic techniques to keep squirrels from raiding, such as netting off sections of branches and a pepper-based compound meant to deter the critter from venturing up the tree in the first place.

“It worked,” he said. “…for about a day. There are just too many ways for the squirrels to get up there.”

There were other natural options said to be effective but Katie admitted sending away for wolf urine was a little more than they wanted to do to enjoy a few peaches.

The Giving Tree
As July turned into August, more peaches remained on the tree than previous years. It seemed the squirrels just couldn’t keep up. Chris decided to seize the opportunity, hand-wrapping as many peaches as he could in a special netting. The hue of surviving fruit began graduate from yellow-green to – dare we call it – peach. Brush strokes of fuzzy orange/red even appeared. 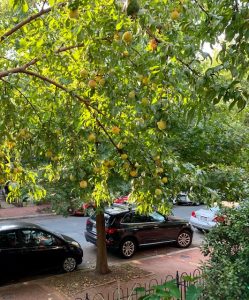 Initially, it was hard to tell if the peaches were actually ready for harvest. Past years provided no instruction of course. But about ten days into August, peaches hit the sidewalk with heavy thuds or splats rather than compact little clunks and bounces – and not just the few Chris had wrapped. An aerial assault was coming.

I sampled peaches that hit the ground. Sweet, juicy, skins a little tougher than what one usually finds at the Eastern Market but quite delicious. Harvest time!

I grabbed whatever was in reach and then got the ladder for upper branches. People walking by could not help but notice, pausing to look up and marvel or to take cover, as needed. Sidewalk chatter about gardening could segue into childhood memories of summer and more. Folks would stop and offer the Bonds tips for agricultural success. One neighbor even printed an article and slipped it through their mail slot.

On the day I left for a family vacation, I delighted passersby by handing peaches from the ladder as I picked them or inviting kids to help themselves to peaches that fell to the ground with only a bruise or two. I pulled a bag together for Chris and Katie and wished them good luck for the imminent peach storm.

Lacking access to the upper limbs, the Bonds had to let the peaches fall where they may. Chris said it took the better part of the weekend to keep up. Merely stooping over and gathering was not enough.

“I was actually using a shovel,” Katie said. If the peaches were now too soft and sweet for the squirrels they were perfect for bees so gathering by hand invited peril. Fortunately, no stings to report.

When my family and I returned from the beach a week later, Chris and Katie gave us a bag of the last of the peaches as well as jars of delicious preserves they had made from scratch. They put additional peaches in the freezer and preserves in the pantry.

Did this year’s juicy sweetness and neighborly sharing erase memories of sweeping up pits and spare the tree from the ax? Or did the stickiness, the smell of brown peach residue, and bees present new reasons to whack? Katie and Chris are giving the matter some thought.

As a de facto co-steward, I am ambivalent. I know the tree will get no prettier or less sprawling in the years to come. Left to grow, it will almost certainly swoop down on us and our neighbors, deposit more messes, test local squirrels’ gluttony, and finally rain down its bounty. That will mean more sweeping and spraying sticky sidewalks and steps, and more bees.

Of course, it will also mean more peaches I can pick from my front door, more fellowship with neighbors, happy kids, and sweet preserves. It has finally become a giving tree – just in time for those maturing oaks to unleash their acorn fury.