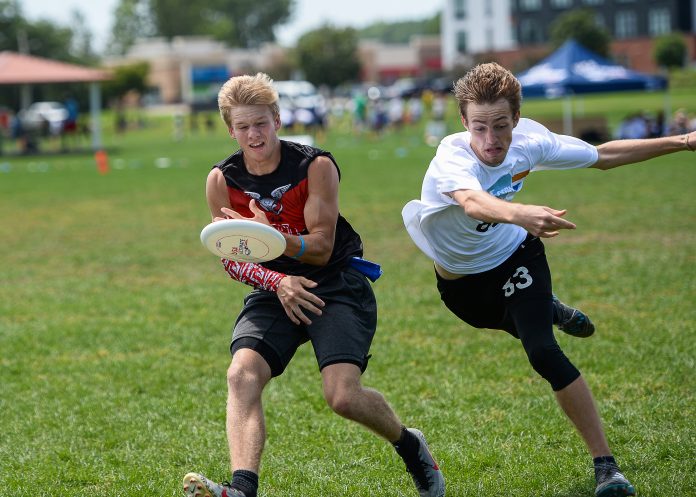 Lucy is jogging upfield, her gaze set back towards the disc. She’s followed close behind by Sage who’s shuffling in a slightly crouched stance. Lucy takes a well-timed in step towards Sage before sprinting deep.

“UUUPP!” resonates from both sidelines as Sage does her best to track down her mark, catching up only to get a better view of Lucy hauling in the disc for a score.

If you aren’t familiar with Ultimate(www.usaultimate.org), that’s ok. Here’s your brief breakdown. Seven players try to pass the disc into the opposite end zone defended by another seven players. If you have the disc, you can’t move, but your teammates can. Working together, teams move the disc upfield and into the end zone. After a team scores the point is over, both teams set up again and repeat the process.

Still lost? Don’t worry. All you need to know about the play is that Sage was roasted. She got mixed. She was put in the spin cycle. In non frisbee terms, she was made to look foolish. It happens to everyone. In my five years of playing Ultimate I’ve been in Sage’s situation countless times.

After the point was done, Sage continued down field. She offered a handshake and a “nice move” to Lucy because, despite being on the receiving end of the vicious in-step, it was a nice play that deserved recognition.

The scoring team rushed the field to celebrate with Lucy, and the other team did the same for Sage. This wasn’t the final point of the game. There really wasn’t anything particularly special about the point, yet all sides celebrated the score.

Strange, maybe, but not for Ultimate.

No Player Left Behind
Swing Vote, DC’s Mixed Under 20 team, has a no player left behind policy, and one way they pick players up after a lost point is by storming the field. The team creates pandemonium and positive energy by waving around giant inflatables of Donkeys and Elephants, the team’s mascots. Their message, “Last point is done. Let’s get hyped for the next one.”

Many Ultimate teams engage in rituals like this with their goal being to add levity to what can be a highly competitive environment. The game evolved from Yale students tossing metal tins outside Connecticut’s Frisbie Pie Company into a full-fledged sport created by Joel Silver of Columbia High School in 1968. Ever since games were being played in the school’s parking lot, spirit was prioritized above all.

“Highly competitive play is encouraged, but should never sacrifice the mutual respect between players, adherence to the agreed-upon rules of the game, or basic joy of play,” states the preamble to the 11th Edition of Ultimate rules.

According to Walt Johnson, a player for another DC Under 20 club, Foggy Bottom Boys, “Spirit is putting the game above yourself. Not just playing to win, but playing while keeping your integrity.”

No Refs to Blame
Ultimate is a self-offiated game. This means players make calls and players come to resolutions without the aid of a referee. As you can imagine, problems arise when the onus to make calls is placed on every individual.

Ultimate games stop constantly by virtue of being self-officiated, but that’s not necessarily a bad thing. There are just a lot of calls and every call brings play to a stop.

An example: I jump to catch a disc and in the process my arm gets smacked by my defender. I call foul and play stops. I tell my side, he tells his, and we either agree on the foul, in which case I get to keep the disc, or we disagree and the disc goes back to the player who made the throw.

The challenge comes when players exploit the system to gain an upper hand.

A Lesson in Conflict Management
During a game as a high schooler, Walt made a call against an opposing player.

“I remember I called a guy out of bounds, and his coach came over and yelled at me ‘What do you mean? He’s clearly not out.’ The kid was also yelling at me and I started to get heated, then realizing even if I’m right, I’m gonna let this one slide because it’s not important to the grand scheme of things,” he recalled.

Obvious Point 1: an adult coach should never yell at a high school athlete on an opposing team.

“It’s a really good exercise in empathy for kids. I always tell my players that the person is not trying to make a bad call. They have their perspective on things and they probably believe their call. They probably believe that they were fouled. Instead of coming at them, just taking a breath and calmly discuss things. You can calmly discuss things with people,” Adrienne Nicholson, one of Swing Vote’s coaches, remarked

“Ultimate really teaches you how to argue, but also how to know when to let something go. Vouching for yourself, but also distancing yourself from the emotional and personal aspect of an argument can be applied to on field debates and discussions in the real world,” Walt said.

The Benefit to Being Spirited
Being spirited means realizing that you might have to sacrifice a bit more in order preserve the game’s integrity when facing coaches or players who don’t buy into Ultimate’s philosophy. Not spirited encounters are natural in any competition, but the reaction to calls usually has more bearing on the game than the call itself.

“Reminding the kids that they can’t control bad calls is important. Just because another team was unspirited doesn’t mean you need to stoop to their level. That’s an uncontrollable. You can’t control the other team’s behavior, but you can control your own before things escalate,” says Nicholson.

Emilio Weber, captain of the men’s team at Wesleyan University, has been playing Ultimate since middle school. He described his experience playing Ultimate as formative to his development as a person.

“I think that Ultimate has made me into a more complete person. I’ve learned how to be a leader, and how to better balance various important things in my life and how to look into other people’s lives.”

Sage could have easily ducked back towards her sideline, avoiding any engagement with Lucy, but in the moment she decided to place the game above herself. When players embrace Ultimate’s philosophy, they drop any notion of “win-at-all-costs.” When we play the game better, we become better.

The DC Breeze (DC’s professional team) start their season in April of 2020. https://thedcbreeze.com/

The WAYU(Washington Area Youth Ultimate) tab on WAFC’s website has information on DC’s high school teams and other ways that kids can play Ultimate. https://wayu.wafc.org/

Finnian Day recently graduated from Wesleyan University and is taking things easy for the time being. He’s been playing Ultimate for 5 years and currently resides in Chevy Chase. You can contact him at finnianday15@gmail.com.

The New Frederick Douglas Bridge – What It is Bringing Us