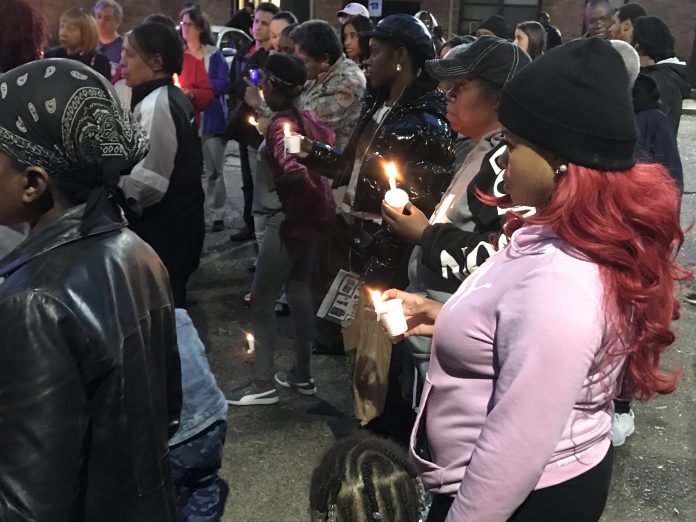 Many of the more than one hundred faces illuminated by candles were also streaked with tears. On Tuesday, Oct. 15, residents of Potomac Gardens held a gathering to remember DC Housing Authority employee Marcus Williams. The event was attended by current and former residents of the complex as well as the wider Hill community.

Speakers shared their memories of Williams, who was well-loved for his positive attitude and hard-working nature. Williams was shot in the complex on Oct. 10th in what authorities said may have been a robbery gone wrong.

Williams was remembered as a happy man, dedicated to doing good work and who could always be counted on to respond to the needs of the community when called upon. One woman said that she would miss his smiling face and his dependability. “You could call him by name, and when you called him, you knew that he would come,” she said.

At the event, President of the Potomac Gardens Residents Association and Resident Commissioner Aquarius Vann- Ghasri said that Williams was a positive man, who was respectful and diligent at his job.

Speaking to residents that may know who was responsible, Vann-Ghasri said, “It’s really senseless for this man to have lost his life. You ain’t big, ‘cause you took this man’s life.”

Calling him a ‘lamb’, Vann said that Williams would play with the little children, and challenged the young men to take as much of an interest in the community’s kids.

‘This Didn’t Start with Marcus’

Residents also called upon District of Columbia Housing Authority (DCHA) to improve security at the complex, particularly in the 1200 block of I Street SE, where Williams lost his life. “They don’t do their job,” said Shirley, a resident of Potomac Gardens. She said that security personnel pay more attention to known residents than danger from outside the fences of the complex.

Williams had been sitting in his car with the door open on the 1200 block of I Street SE, right across from the gates to the Potomac Gardens parking lot, when a man approached his car on the passenger side. Video surveillance showed Williams get out of the car and run away down the street, with the suspect in pursuit.

“We’re all tired,” one woman said, speaking of gun violence to the crowd at the vigil. “This did not start with Marcus –it’s been going on for three years.”

“It should not have taken Marcus dying to get attention to this issue.” she said. “It’s unacceptable. Do your job or get the hell off the property.”

DCHA did not immediately respond to a request for comment for this story.

Naomi Mitchell, the Community Liaison for Councilmember Charles Allen, spoke to the crowd and encouraged them to come forward for the safety of the community.

Describing the vigil as ‘positive and encouraging’, Mitchell acknowledged the role of mothers and women in community safety. She also reminded the assembled of the District’s Red Flag law. Passed in 2018, the law allows residents to take firearms from those considered a danger to themselves or others, or peaceably surrender illegal firearms without the possibility of arrest or prosecution on firearms charges.

Williams’s brother, Morris K. Williams Jr., was immediately circled by residents when he arrived at the vigil. Morris Williams said he will take his brother’s body home to be buried in North Carolina, next to his mother. Janet Williams died of a heart attack two days after being told of her son’s murder.

Thanking the crowd for coming, Williams fought back tears as he fought for words. “My brother was a good man,” he said. “He loved people. He just liked to help people out.”

“And I miss him tonight.”

The crowd said a prayer for Janet and Marcus Williams, before lining up to embrace his brother, tears in their eyes.

Anyone with information about this incident is asked to call Metropolitan Police Department (MPD) at 202-727-9099 or text tips, photos or video anonymously if preferred to 50411.