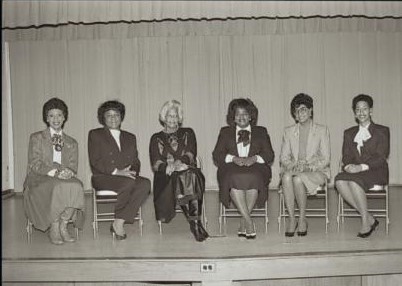 October’s Woman of Ward 6 is Veola M. Jackson, a dynamic educator who was the first principal of the Capitol Hill Cluster Schools (Peabody, Watkins and Stewart-Hobson). She changed Capitol Hill by not only giving parents the option of putting their children in public school, but by making those schools representative of the diversity of the population of Capitol Hill.

The Ward 6 Democrats are recognizing and honoring Ward 6 women who have made significant contributions to better our community as a lead-up to the 2020 anniversary of the ratification of the 19th Amendment, which gave women the right to vote.

The Hill Rag on May 3, 1991, gave Jackson this praise: “Her acute sensitivity to the needs of our community and her tireless quest for educational excellence has helped change the face of Capitol Hill. By inspiring a dramatic improvement in public education, Mrs. Jackson has given young, middle class families renewed confidence in public school as a viable alternative for their children.”

Jackson was described by Courtland Milloy of the Washington Post in 1983 as “unquestionably among the brightest and indeed most able school administrators in the system.” At the time, Jackson said: “I’m very competitive, you might say hung up on tests. Like it or not, people judge a school by its test scores.”

When Jackson became principal of Peabody in 1972, only 1 percent of the students were non-black. By 1984, Jackson said, the student body “reflects the diversity of the neighborhood, with blacks, whites, Asians and others” enrolled. “It’s a well-integrated school,” she said. She later became principal of Hobson before she was named the principal of the Capitol Hill Cluster Schools.

The Post described Jackson as a poised and bespectacled woman of 53 in 1984, with fluffy swirls of gray and black hair. One of her challenges, the Post said, was to turn Hobson into a fine school. That effort was rewarded when Hobson was selected to receive an exemplary school award by the Department of Education.

In August of 1984, Floretta D. McKenzie, DC school superintendent at the time, told the Washington Post that she was confident that Jackson could handle all three schools and their 850 students. McKenzie said Jackson was “a very dynamic educator, a real tour de force. She seeks out challenges so she can conquer them. She needed the new challenge. She thrives on that. Her performance will probably go up rather than down.”

Veola M. Jackson was 59 when she died on Sept. 3, 1991. She had retired earlier in 1991 as principal of the Capitol Hill Cluster Schools. She was born in Baltimore in 1932. She received a master’s degree in dietetics from Fordham University and a master’s degree in education from the University of Massachusetts. She also studied at Harvard. Her first job was in dietetics at Fordham Hospital. She then went to work as a home economist for Pet Milk. Her gift for communicating prompted her to try her hand with a public relations firm, Herman Smith, where she represented a number of high profile companies. She also began her career as a radio and television personality. She hosted her own show out of Baltimore called “Say Hello to Veola.”

A visit to a friend in Washington, who was teaching for DC public schools, sparked her interest in the field of education. She relocated from Baltimore and began teaching mentally disabled students at Grimke School.

In her 18 years as a principal, she received many honors and awards. She  received the Washington Post Distinguished Educational Leadership Award in 1989 and the Capitol Hill Community Achievement Award from the Capitol Hill Association of Merchants and Professionals in 1985.

About the initiative: The Women of Ward 6 initiative is a non-partisan recognition of Ward 6’s women. The initiative, in partnership with the National Woman’s Party, Capitol Hill Restoration Society and the Hill Rag will culminate in the 2020 100th anniversary of the ratification of the 19th Amendment, which gave women the right to vote.

Marci Hilt is a retired communications coordinator and press secretary at the U.S. Department of Agriculture and the Office of the U.S. Trade Representative. She currently writes and edits EMMCA MATTERS and is treasurer of the Ward 6 Democrats.

The Wrong Choice for DC Workers