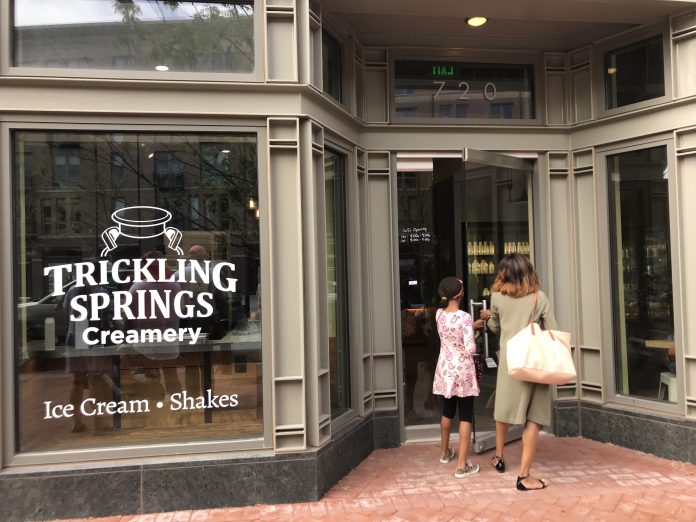 The creamery itself will cease production Friday, and the two District stores, at Eastern Market and Union Market (1309 Fifth St. NE), will close over the next two weeks.

As recently as Sept. 7, the creamery launched new product packaging, a 12-oz bottle size for organic milk and cream. No reason was given for the sudden closure, although a recent report by Popville noted allegations of financial mismanagement.

Eastern Market Manager Burdge said he learned about the closure on Wednesday. He said the Eastern Market store expects to receive an ice cream and milk delivery on Friday and Monday and that the team will serve while the supply lasts.

Both Burdge and his wife, Jessica, have worked for the company for eight years. He said that they are grateful for the friends and neighbors who reached out when they heard the news.

“We will miss serving all of you ice cream and hope we brought joy into your lives in the years we worked at Trickling Springs Creamery.”

Burdge said that Trickling Springs Creamery has said that they plan to keep the DC locations open for a few more weeks. He plans to remain at the stores as they close to make the transition as smooth as possible for the employees at both locations.

“We are grateful for the more than eight years of employment Trickling Springs Creamery gave us,” said Burdge.

Burdge said that bottles will be accepted for return at both locations as long as they remain open. You can learn about the company and its extensive operations on the website, which as of Friday morning had not yet been updated to include news of the closure, at tricklingspringscreamery.com.