Police announced they had made an arrest in an assault with a knife that happened Saturday, Sept. 7, 2019, on the 1600 block of Benning Road, Northeast.

At approximately 9:18 p.m. that day, members of the Fifth came to the location to investigate reports of a stabbing. When they got there, officers found an adult male victim suffering from multiple stab wounds.

DC Fire and Emergency Medical Services (DC FEMS) were summoned to the scene and transported the victim to a local hospital for treatment of life-threatening injuries.

On Saturday, September 7, 2019, a 38-year-old Southeast man was arrested and charged with Assault with Intent to Kill while Armed (Knife) by responding officers.

The Metropolitan Police Department (MPD) announced that they made an arrest in a burglary that happened Saturday, Sept. 7, on the Unit block of M Street SE.

At approximately 5:58 a.m. Saturday, a suspect forcibly entered an establishment on the block. Once inside, the suspect took property and then fled the scene.  The suspect was arrested by responding officers.

A 61-year-old man of no fixed address was arrested and charged with Burglary Two.

At 5:10 a.m. Saturday, a woman was arrested on the 1300 block of South Capitol Street SW on charges of Assault on a Police Officer.

At 9:15 p.m. Saturday, a woman was arrested on the 1700 block of Benning Road NE on charges of Driving Under the Influence.

At 1:36 a.m. Sunday, a man was arrested on the 1300 block of First Street SW on charges of Assault with a Dangerous Weapon.

At 2:17 a.m. Sunday, there was an assault with a dangerous weapon on the 1900 block of Maryland Avenue NE.

At 6:51 p.m. Sunday, a man was arrested on the 1500 block of Benning Road NE on charges of Carrying a Pistol Without a License.

The Blotter is based on the reports posted on September 8th and 9th, 2019 by the MPD to the 1D Listserv and 5D Listserv. 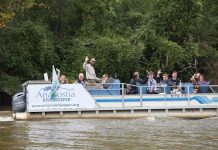