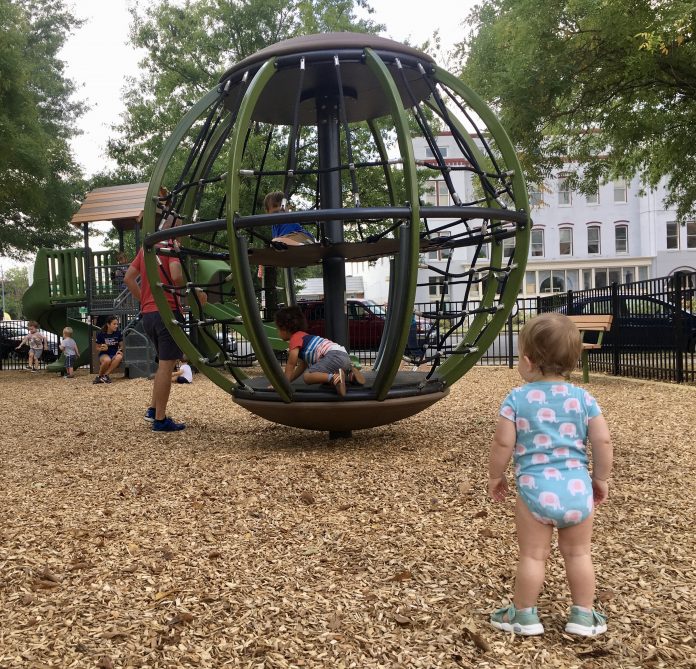 DC’s Department of General Services (DGS)announced Friday that the temporary playground at Eastern Market Metro Plaza (EMMP) will open Saturday, August 17th. The Department of Parks and Recreation (DPR) will be taking over the opening and closing of the playground, which will be open from dawn to dusk.

The playground was completed Wednesday, August 14. DGS said that the playground has passed all of the required inspections.

Construction on the playground began July 22nd. The temporary playground is located near the intersection of Pennsylvania Avenue and Ninth Street SE, about 45 to 50 feet from Ninth Street. That’s slightly further west than the location of the ad-hoc play space at the site.

The new equipment is inside a black metal perimeter fence in the copse of trees along Pennsylvania Avenue SE and includes two major play pieces and three benches. The playground is designed for use by children between the ages of 2 and 5 years old.

Installation of the playground uses funds provided by the construction agreement with Stanton-EastBanc made prior to the start of work on the Hine Project, including 700 Penn, the Residences at Eastern Market, and the C Street SE Plaza.

“Again, this playground is part of a community benefit package from Hine Development that ultimately will be incorporated into a larger playground once the metro park project is completed overall,” noted DGS representative Donna Harris prior to construction.

Work on the renovation of a newly-imagined Eastern Market Metro Plaza (EMMP) Park was kick-started By DGS in fall 2018. The renovation will include work on the area around Eastern Market Metro Station (Parcel 4), the area around the George Didden II Holiday Tree (Parcel 1, also containing ‘Plastic Park’) and smaller parcels of land in front of Trader Joe’s, Dunkin Donuts and in the center of Pennsylvania Avenue SE.

DGS is conducting an online survey, seeking opinions on elements such as playground equipment, art installations and wayfinding. You can complete the survey until August 21. DGS said that there will also be a fall community meeting regarding the project, with the date to be announced.

Construction on the full project is expected to begin this winter.

Questions about the overall EMMP project may be submitted via email to emmp@dc.gov. For more information on the EMMP project, visit the DGS EMMP Project Page. Find the online survey at www.surveymonkey.com/r/EMMP2019 until August 21.