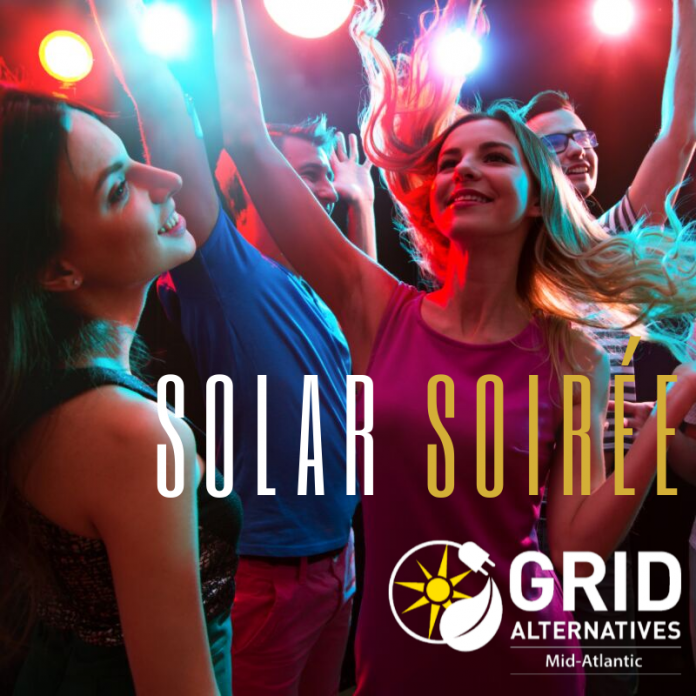 Celebrate GRID Mid-Atlantic’s five-year anniversary and honor local champions of environmental justice, social justice, and workforce diversity. GRID Alternatives Mid-Atlantic is pleased to announce it will be hosting the Solar Soirée on September 19.

Support Solar In Your Community

The Solar Soirée is a fundraising event supporting the efforts of GRID Mid-Atlantic to bring solar power and solar jobs to low-income communities and communities of color. Since it was founded in 2014, GRID Mid-Atlantic has been a leader in making solar energy and solar jobs accessible for low- to moderate-income residents and people of color in D.C., Maryland, Virginia, and Delaware.

To date, GRID Mid-Atlantic has installed 247 solar energy systems in the region, averaging nearly 50 installations per year, at no cost to clients. Those solar energy systems have provided more than $7.2 million in energy savings for low- and moderate-income residents.

The Solar Soirée will highlight local leaders that demonstrate GRID’s core values of environmental justice, social justice, and workforce diversity. In doing so, they have helped improve access to renewable energy and bridge gaps in opportunity for marginalized communities.

Confirmed honorees at the event include environmental and social justice champions Dr. Mustafa Santiago Ali of the National Wildlife Federation and Mary M. Cheh of the D.C. Council, as well as workforce diversity champion Andy Shallal, the founder and CEO of Busboys and Poets.

Dr. Mustafa Santiago Ali has fought on behalf of environmental justice and economic equity for nearly three decades as a guest lecturer, a 24-year employee at the Environmental Protection Agency, and currently as the Vice President for Environmental Justice, Climate, and Community Revitalization at the National Wildlife Federation. Dr. Ali’s stated vision “is to uplift our most vulnerable communities by creating authentic collaborative partnerships committed to moving from surviving to thriving.”

As the D.C. Councilmember representing Ward 3 since 2007, Mary M. Cheh has played a major role in the District’s commitment to environmental sustainability. Councilmember Cheh has championed legislation to protect the environment, improve the health of District residents, and has fought for good government. Mary’s signature environmental bill, the Clean and Affordable Energy Act, created a special body to assist residents and businesses to curtail energy use. Cheh also helped bolster the Renewable Energy Portfolio; mandated energy benchmarking of buildings; and fostered the installation of solar energy, green roofs, and alternative energy systems.

Andy Shallal has received numerous awards, including the Mayor’s Arts Award, the Mayor’s Environmental Award, and Employer of the Year from the Employment Justice Center, for his work as the founder and CEO of restaurant group Busboys and Poets. Busboys and Poets is a group of restaurants in the Washington Metropolitan area where art, culture, and politics intentionally collide over mindfully sourced food, drinks, and programming. Busboys and Poets has been at the forefront of environmental stewardship as one of the first businesses in Washington, D.C. to be 100 percent wind-powered and at the cutting edge of the local and sustainable food movement. He has founded and co-founded several peace and justice organizations and holds leadership positions in numerous others.

There will be live musical performances during the event’s cocktail hour and between remarks by the honorees. Steelpan player Josanne Francis, a native of Trinidad & Tobago who has previously played at Carnegie Hall and the Kennedy Center, will perform with her trio during the event’s cocktail hour. Local group BFDS, which draws influences from funk, rock, hip-hop, and jazz, will perform during the second half of the event. DJ Ra will provide music throughout the show.

GRID Mid-Atlantic would also like to thank sponsors Smoke & Barrel, Sierra Nevada Brewing Company, and Tito’s Handmade Vodka, which will provide dinner and beverages for attendees.

Season’s Greetings from the Hill Rag