Construction vehicles, mainly dump trucks, associated with The Kiley, a new rental building being constructed at 301 G St. SW, just south of I-695, are reportedly using G Street SW to get to the highway. Construction vehicles are also parking illegally on the circle at G and Third Streets SW.

As a residential street, G Street is closed to truck traffic according to the trucking and bus restriction map created by the DC Department of Transportation (DDOT). The construction permit issued for The Kiley project also clearly shows inbound and outbound truck traffic routed north on Fourth Street SW.

Commissioners were concerned about the impact of truck traffic on a completely residential street. In particular, they raised the issue of the impact on pedestrian safety of children using the Amidon playing field. Also, the vehicles, they pointed out, were not braked when taking a right on red at the intersection of G and Seventh Streets SW headed north. This endangers commuters walking to the metro.

Commissioner Collins stated that commissioners had met with the construction company on more than one occasion. They had promised to curtail truck traffic on G Street SW and end illegal parking in the G and Third Street Traffic Circle, Collins stated. Further, the developer had promised weekly updates.

Collins moved to send a letter to Mayor Muriel Bowser (D) requesting immediate enforcement of trucking restrictions. “We have never had to send this type of letter to the mayor,” Collins stated. His motion passed unanimously.

The Wharf Part II
Representatives of The Wharf gave an update on the project’s second phase. The bulkhead construction is now 75 percent complete, they stated. Construction is about to commence on the water building and new pier. Maine Avenue utility upgrades and traffic signalization work is ongoing. Commissioner Litsky asked the developer to ensure that all construction traffic adhered to agreed routes and that dump trucks were watered down and covered before departing the construction site to reduce dust.

Led by Chair Fast, commissioners raised concern about botched utility work on Maine Avenue SW which had browned and blacked out much of the neighborhood within immediate vicinity of The Wharf in June. Pepco had incorrectly informed a Wharf subcontractor that a vault was de-energized, when in fact it was fully powered. Commissioners pointed out that nearby high rise residential had suffered air conditioning and elevator failures as a result of the brownouts. Consequently, they had incurred significant repair costs.

“I expect PN Hoffman and The Wharf to stand behind the community in recouping these costs from Pepco,” stated Fast with her fellow commissioners nodding in agreement.

Plans for CSX Property Proceed
Greystar, the developer of the large former CSX parcel between South Capitol and New Jersey Avenue SE abutting I-695, presented its plans for a mixed use, 450,000 square foot 125 feet tall, building on the western end at 2 Eye Street SE. The project incorporates ground floor retail and residential rental units. Half the rentals would function as “short stay.” The developer would be seeking a “lodging” Certificate of Occupancy available in a D5 Zone to accommodate this use.

The developer did not ask the commission to take action. At a later date, the commission would be asked to support some zoning relief relating to floor area ratio (FAR) and setback requirements, they stated.

The commission does not endorse short stay apartments, stated Chair Fast. “You may be in a D5 Zone, but it is all residential surrounding the project,” Commissioner Forgie chimed in, seconding Fast’s objection. “We need neighborhood serving retail,” Commissioner Hamilton added, asking for a lighting plan.

Construction will impede pedestrian access on the east side of South Capitol, the developer stated in response to a commissioner’s query. A remediation plan approved by DOEE is in place for the entire site, they added.

Construction on the eastern side of the project would commence in three to four weeks, Greystar stated. The western side is scheduled to break ground next April.

Other Matters
MPD Captain Aubrey Mongal briefed the commission on public safety issues. There has been an overall decrease in crime from last year, he stated. The peopled involved in the June 22 shooting were acquaintances and police are about to close the case. The First District has put an enforcement team in place to ticket construction vehicles illegally transiting through residential neighborhoods, he continued. Police are also ticketing buses that illegally idle. Queried on illicit street corner gambling on O Street SW, Mongal advised community members to call 911 and report such incidents. He also advised neighbors to report hearing gunshots even if uncertain whether or not the noise resulted from fireworks.

The commission listened to a presentation by Solar for All. Sponsored by the Dept. of Energy and the Environment (DOEE) and The DC Sustainable Energy Utility (DCSEU), the program seeks to install solar in 100,000 District homes by 2032.

The commission unanimously approved plans by Jair Lynch to install digital signs at 1250 Half Street, SE. The developer plans to display a mixture of community content and sponsored messages. There will be no moving graphics except an hour prior and a half hour after games. Free time will be given to community organizations. The hours of operation will be 7 a.m. to 11 p.m. aside from games when they will be on to 11:45 p.m. “I don’t love these signs. They are not aesthetically pleasing. But they serve a public purpose and it is an entertainment zone,” stated Commissioner Forgie. The commission supported the plan unanimously.

The commission voted to support an application by The Mary, 2100 Second St. SW, as well as accept the establishment’s cooperative agreement. Commissioner Collins abstained.

The commission voted to protest the application of Dacha, 79 Potomac Ave. SE, on the grounds of peace, order and quiet. Commissioner Dale opposed the motion. It appointed three members of the Alcohol Beverage Committee to act as a negotiating team in hopes of withdrawing the protest. Commissioner Dale abstained.

The commission unanimously to:

The commission does not meet in August. ANC 6D’s next meeting will be held on Sept.9 at 7 p.m. at 1100 Fourth St. SW. Visit www.anc6d.org for more information. 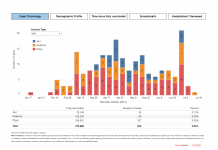