Police announced Thursday evening that they had arrested a man in connection with a Southwest package theft.

On Tuesday, July 16th, officers from the Metropolitan Police Department (MPD) went to the 1300 Block of Half St SW in reference to a Package Theft that had just recently occurred. Officers were able to find video footage of the incident and suspect. This footage allowed MPD to distribute a lookout of the suspect to all the First District Officers.

Two days later, on Thursday, July 17, the First District Mountain Bike Unit was patrolling the area and officers saw someone that matched the lookout from the package theft suspect.

Officers made contact with that individual and during the course of their investigation determined that it was person who committed the package theft.

At 1:05 a.m. Thursday, a man was arrested on the 700 block of H Street NE on charges of Theft of Automobile.

At 6:50 p.m. Thursday, a woman was arrested on the 1600 block of Benning Road NW on charges of Distribution of a Controlled Substance.

The Blotter is based on the reports posted on July 18th, 2019 by the MPD to the 1D Listserv and 5D Listserv. 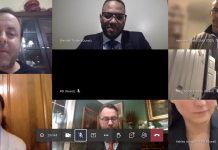