Last week, The Washington Post printed a photo of me on the front page of the metro section. The photo caption was “ANC Commissioner Denise Krepp, who has demanded transparency from the council, was not allowed in the meeting.”

Within minutes of the newspaper being delivered on Capitol Hill doorsteps, friends emailed and texted asking what had happened. The answer – Chairman Mendelson refused to allow the public to attend a public meeting regarding Councilmember Evans, and I was the only elected official in the room to object.

Earlier this spring, The Washington Post and District Dig published articles regarding Councilmember Evans actions while serving on the Washington Metropolitan Area Transit Authority (WMATA) Board of Directors. Twenty Advisory Neighborhood Commissioners (ANCs), including myself, sent a letter to Council of the District of Columbia Chairman Mendelson on March 19, 2019, asking him to initiate an investigation. We never received a response.

The letter was signed by 25 ANCs and it was emailed to Chairman Mendelson, ccing all councilmembers. As with the March 19th letter, Chairman Mendelson did not respond to the June 26th letter so Commissioner Palmer asked him about it on Monday, July 1st. His response – I didn’t read your email and I haven’t been briefed on the letter.

So that’s how I became the mail carrier last week. Carrying copies of the March 19th and June 26th letters, I attempted to attend the Council of the District of Columbia’s July 2nd meeting regarding Councilmember Evans. Council staff attempted to bar me from entry. I’m an elected official and it’s a public meeting I told them. “So what,” they responded, we’re still not letting you in.

During this exchange with Council staff, several Councilmember walked by and I shared that I wasn’t allowed in. “So sorry” they replied as they took their seats. Chairman Evans, having been tipped off that I was at the main door, attempted to enter the room via a side entrance. That’s when I became in Councilmember Cheh’s words “disruptive.” “Chairman Evans”, I asked politely, “please acknowledge the ANC letters.” I repeated this refrain several times and when it became apparent that he would not take possession of these letters, I slid them to him across the table.

Having successfully delivered the letters I left the room and then spent several minutes pondering what happened. When did it become acceptable to not allow the public to attend a public meeting? Why weren’t any of the councilmembers troubled by the public’s exclusion? And lastly, why doesn’t Chairman Mendelson read letters sent to him by ANC Commissioners? 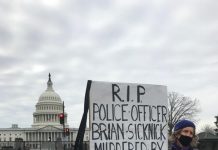