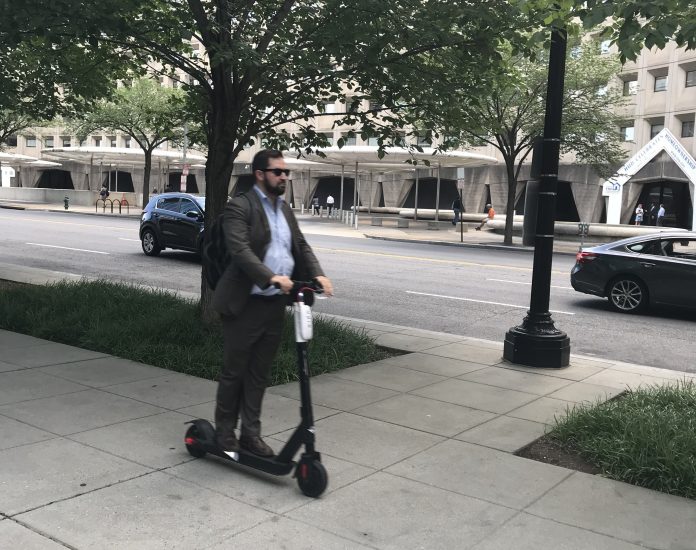 Think on these key words: menace, frightening, dangerous. Now, think how they relate to an invasion of our sidewalks.

All together now….SCOOT OFF SCOOTERS!

What, you don’t agree? You’re not going to join the campaign to force them onto the road? Then you haven’t been airbrushed by one, even sent flying, tripped over one left slung across the sidewalk. Well, not yet maybe. But you will be a “get-rid” fan the moment a scooter — guided by its bad-mannered, entitled rider — encroaches into your pedestrian space.

This summer, hundreds more of these electrified horrors are to invade our streets under the city’s declaration to “encourage the integration of private alternative modes of transportation” in a bid to “contribute to DC’s vision of being a sustainable, resilient and livable city.” Another three scooter companies have joined the five already operating. Except it will not be the streets that take the burden….but the poor pedestrian who takes his or her life in their hands as they stroll our neighborhood.

The behavior of the indolent scooter-rider was best described by a guy, in his mid-40s, who I spoke to after he man-handled an abandoned scooter – left mid-sidewalk – into the gutter. “They’re the spoilt brat generation. The kids who were never made to pick-up after themselves at home,” he muttered. Well said.

Commentators keep banging on about the dangers scooters present to riders. Frankly, to heck with them. They are in charge of their own safety, as they “race” around at 15 mph, on the $1 a time plus 15 cents a minute, dockless rentals. It’s the dangers inflicted by scooters on pedestrians that we should be concerned about.

Constantly we hear that scooter riders are being encouraged to wear helmets. That’s up to them. What should be rammed into them is that there’s also an urgent need for them to look out for the safety of pedestrians. All they need to remember is that it’s called a “sidewalk” for a reason. It’s the place to walk! In other words ride where you belong – on the road, where with a helmet and a bit of care, you’ll be safe. And while they digest that “safety for others” homily they should also follow the instructions issued by the scooter companies. To paraphrase they all advise that “the scooter should not be left blocking any pedestrian access”.

We should demand that Capitol Hill gets the same designation as downtown, where it is illegal to ride either a bike or a scooter on the sidewalk. And to curb those who flout that restriction let’s follow the lead of Paris, the first city in the world to clamp-down on rude, offensive scooter behavior. The City of (see the) Light recently brought in fines – $150 for riding on the sidewalk, $35 for dumping one where it blocks a pedestrian’s right of way. I know, I know, enforcement (like as in using a ‘phone while driving) can be lax but at least an “we’re after you” message would be sent.

It would all be so laughable, these arrogant dorks scooting around us with often just inches to spare – if it wasn’t so deadly serious. How awful to think that it may be that’s what it’s going to take: an injured pedestrian who’s been hit by a scooter or fallen over one, to force these scooter monsters onto the roads where they belong. But not let’s wait until the city or a scooter company is sued for injuries. All together now – SCOOT OFF SCOOTERS.

NB: all these comments include obnoxious cyclists, the ones who whizz around on our sidewalks, weaving at a fast rate of knots in and out, around pedestrians. So, Boot the Bikes too….

Time To Stand Up in Lafayette Park

Don’t Place Your Faith in Build First for Greenleaf