He said the hands of one child were injured, while the other suffered to the hands, face and chest area. One boy lost two fingers and a thumb. “Both injuries were a result of blast injuries that caused significant damage to the individuals,” said Falwell.

“In each case the individuals were holding the firework when they lit the firework, thinking they could get rid of it in a fast motion,” Falwell explained. “But these fuses tend to burn very quick, and that misjudgment can be very costly, and in these particular cases they caused serious injury.”

Falwell said that so far, it was unclear where or from whom the youths had obtained the illegal fireworks. The two are expected to recover from the blast.

The injuries were caused by a M-80 or ‘cherry bomb’ type firework, he said. The fireworks appear to be tubes, with a diameter about an inch and half, with a fuse protruding either from inside the tube or from the side of the tube about halfway down the length. They are illegal in DC.

DC FEMS tweeted the image of an M-80 firework Monday (on left).

Which fireworks products are illegal in DC?

The United States Consumer Product Safety Commission estimates that there were 9,100 fireworks-related emergency department-treated injuries in 2018, with 62 percent of them occurring between June 22 and July 22.

During that period, firecrackers were the number one cause of injuries, accounting for 19 percent of the estimated injuries. Sparklers accounted for more than half of the total estimated injuries in children under 5 years old.

“Each year, we give young kids sparklers in their hand –and they don’t realize how hot they can burn. Sparklers do cause burns in children,” he said. He reminded parents that they should not let children light fireworks.

Falwell said to stay away from illegally sold fireworks, as the contents and quality of manufacture cannot be guaranteed. If found, illegal fireworks will be confiscated and destroyed by DC FEMS. “We destroyed a truckload of fireworks that we took off the street last year,” he said.

“Don’t buy fireworks from individuals who are selling them from the trunks of their vehicles or from backpacks,” said Falwell, noting that such illegal vending had been seen in the District in past years.

Falwell said that illegal fireworks are anything that explodes, shoots projectile or moves once it lights or emits spark greater than 12 inches in length.

“My team is prepared, I know that MPD is prepared –we’ve had shared meetings. I know that we’re ready to take on the task of making sure that the residents have a happy and safe Fourth of July.”

Report the use of illegal fireworks use or sales to the DC Fire Marshals office at (202) 727-1600 for immediate action. If you think someone is in danger of injury, or there is potential for a fire, call 911. 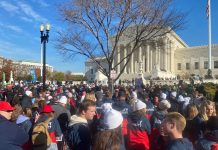