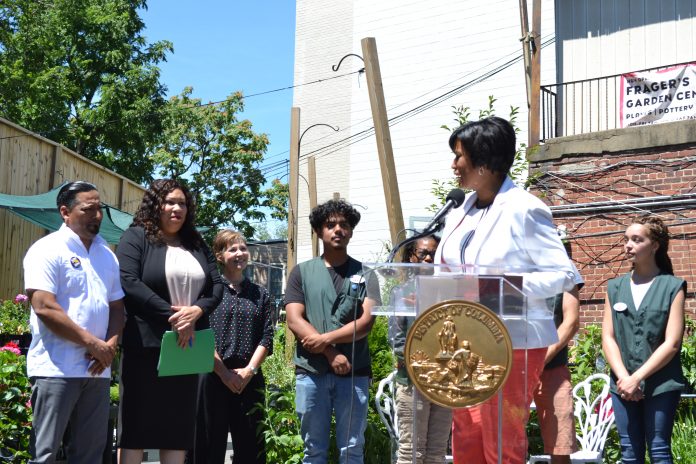 “I’m sure everyone here in the surrounding neighborhood is glad to have Frager’s back and to see these wonderful employees –and look at this garden paradise!” she said, gesturing to the flowers surrounding the podium.

The mayor was surrounded by Frager’s employees, many of whom earn more than minimum wage. Effective July 1, 2019, the District’s minimum wage increased from $13.25 to $14.00 per hour, Under the law passed in 2016, the minimum wage will increase to $15.00 per hour by 2020, and will increase each year after 2021 in proportion to the increase in the Consumer Price Index. Employers are required to pay tipped workers a minimum of $4.45 per hour, and to make up the difference if tips averaged for the week fall short of the $15 hourly minimum wage.

Schaefer said the Mayor’s Office chose Frager’s for the announcement because they wanted to be at a prominent local small business, but added that the choice had even more significance for her.

“It’s perfect, because for the past five years or so I’ve actually been a part of an organization called Businesses for a Fair Minimum Wage,” said Schaefer. “I’ve spoke on the Hill and at the Wilson Building in order to increase the wages.”

“So, it was meaningful for me to be here when they announced it,” she said.

Jaime Contreras is Vice-President of SEIU Local 32. The union represents 20,000 in the DC area, most of whom work in DC, including those who maintain and secure city and commercial buildings, airports and universities in the area. “They are what some call the invisible workforce,” Contreras said. “They have family members who work at places like this or Target or other place do not have a union and work minimum wage jobs.”

“We cannot underestimate what a $15 minimum wage would do for a worker who works two and three jobs –even our members, some of them work two jobs.”

Contreras noted that DC was one of the first cities to commit to a $15 minimum wage, joining California cities such as Los Angeles and Pasadena. San Francisco adopted a $15 minimum wage July 1, 2018 and New York City did the same at the end of that year.

Schaefer said that Frager’s has already exceeded the bump in starting wages announced Monday, and offers additional benefits as part of the employment package for both sales staff and management.

“Our starting wage is already at $14.50, so we’ve run ahead of what the city’s number has been, just to keep our finances rolling properly,” Schaefer said. That wage does not include other benefits such health care coverage, 401K, and profit-sharing.

Bowser acknowledged that some businesses worry that increased wages for workers will cost their bottom line. She said that since the law was introduced in 2015, they have had the opportunity to plan years in advance of the increases. “Business are working and planning to absorb that,” she said.

Asked to comment on penalties for employer non-compliance, DOES Director Morris-Hughes said that penalties range depending on the infraction.

“What’s really important to underscore here is that we enforce, and we monitor and we investigate,” said Morris-Hughes, noting that there have been few complaints in regard to compliance with minimum wage legislation.

Asked for her response to those who might say the increase does not go far enough for families living in one of the nation’s most expensive cities, Bowser acknowledged the difficulties but said it was an improvement overall. “We know that probably a $15 an hour job for a family won’t be enough,” she said, acknowledging Contreras’s description of those working at multiple jobs to make ends meet in the District. “Certainly 11.25 wasn’t enough, and $15, certainly if you have two earners in your household, will get you further.”

Bowser said that the District was doing more to make DC more affordable. The mayor cited investments in workforce development programs, the creation of affordable housing, efforts to improve the reliability and cost of transit, such as with the free DC Circulator as well as the new childcare tax credits.

The wage increase is expected to benefit over 200,000 workers in the District, said the Mayor’s office.

Walk-Up Vaccination Open to Residents 12 and Up