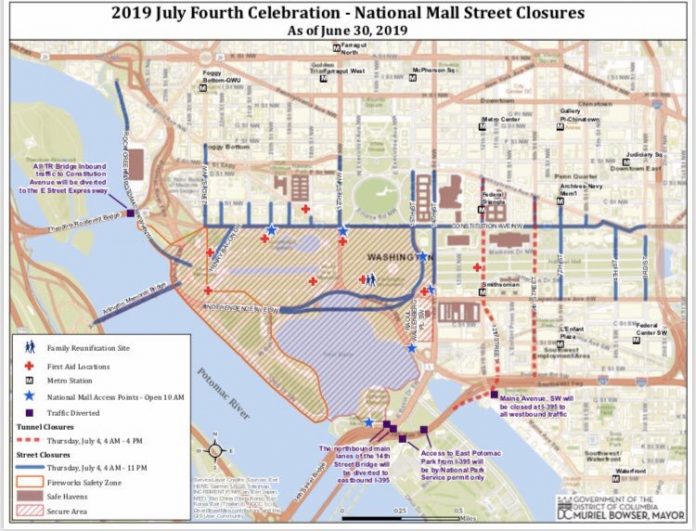 On Thursday, July 4, there will be celebrations all over the country. Many people are coming to events held here in DC. Together with the event on the National Mall, there will be street closures affecting residents of Southwest especially, but worth noting for anyone trying to get around the District.

Notably, the Florida Marlins are in town to play the Nationals, which could lead to increased traffic around the stadium. Most of Barracks Row will be closed from 10 a.m. to about noon for the Capitol Hill Community Fourth of July Parade.

In addition to events on the National Mall, motorists should expect heavy traffic and delays around other Fourth of July activities taking place in the city. There are also restrictions affecting watercraft on the rivers, and entry to National Parks.

Check below for details.

In and around the Hill:

The Washington Nationals will host the Miami Marlins at the Nationals Stadium at 1500 South Capitol St. SE. Traffic disruptions and increased pedestrian presence should be expected.

The Capitol Hill Fourth of July Parade on Barracks Row will take place at 10:00 a.m.

The following street will be closed and posted as Emergency No Parking for the parade from approximately 8:00 a.m. to 12:00 p.m., taking place along Eighth Street SE from D Street to I Street SE 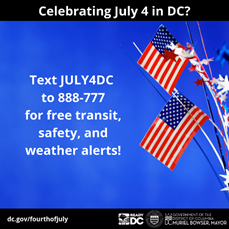 The following streets will be closed and posted as Emergency No Parking on July 4 from approximately 4:00 a.m. to 11:00 p.m.:

The 3rd Street Tunnel will remain open for travel into and out of the city.

Motorists are reminded that stopping or standing is prohibited on any city streets or roadways to observe the fireworks. Motorists doing so should expect to be ticketed and possibly towed.

The Metropolitan Police Department and the D.C. Department of Transportation also want to remind motorists in the vicinity of these events to proceed with caution as increased pedestrian traffic can be anticipated.

For official information from DC Government related to the 2019 Independence Day Celebrations, text JULY4DC to 888-777 to receive free alerts on weather, traffic, transit, and more.

Residents and visitors of the District are urged to be vigilant and follow the motto, “if you see something, say something.” To report immediate threats or emergencies, call 911. To report suspicious activity or behavior, call 202-727-9099 or text 50-411.