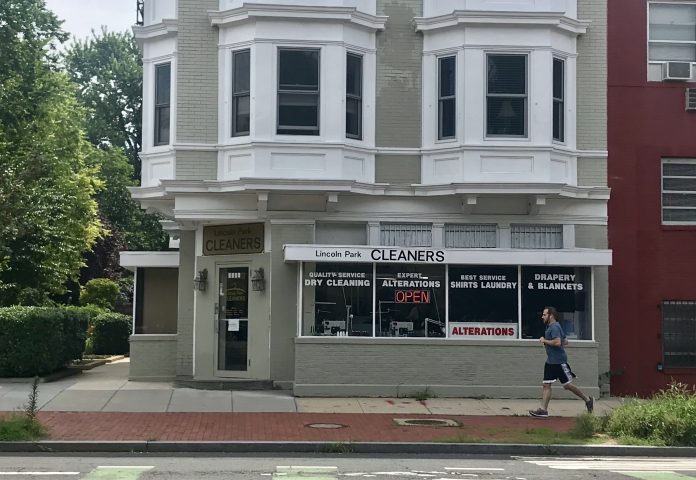 First District Detectives say at around 5:45 p.m. June 24, a man entered the dry cleaner, pulled out a handgun, and fired it before demanding cash from the employee.

The employee was fortunately not injured by the gunfire and gave the suspect cash. The suspect then ran out the front door, heading northbound on 13th Street NE.

A look out was issued for a middle-aged black male, described as medium height, clean shaven, and wearing beige colored hat, dark colored shirt and carrying a handgun.

Police recovered two .22 caliber shell casings at the scene. The suspect stole a total of $80.

The dry cleaners was open for business as usual Tuesday morning.

Police are looking for any information, photographs or video that can help with the case. Investigators can be reached at (202) 299-2025, should you have any information about the incident.  Alternatively, information can be forwarded to investigators by contacting the Metropolitan Police Department’s Command Information Center at (202) 727-9099 or the Text Tip Line by texting 50411.

Crime Solvers of Washington, DC currently offers a reward of up to $1,000 to anyone who provides information that leads to the arrest and indictment of the person or persons responsible for a crime committed in the District of Columbia.

At 12:40 a.m. Monday, a man and a woman were arrested on the 800 block of Third Street NE on charges of Possession of a Controlled Substance.

At 2:31 a.m. Monday, a man was arrested on the 1400 block of L Street SE on charges of Carrying a Pistol Without a License.

At 2:40 a.m. Monday, a man was arrested on the 1200 block of Delaware Avenue SW on charges of Simple Assault.

At 3 a.m. Monday, a man was arrested on the 1600 block of C Street NE on charges of Driving Under the Influence.

At 3:33 p.m. Monday, two men were arrested on the 1500 block of Isherwood Street Ne on charges of Distribution of a Controlled Substance.

At 5:10 p.m. Monday, a man was arrested on D Street SW on charges of Threatening to do Bodily Harm.

At 10:14 p.m. Monday, a man was arrested on the 1200 block of I Street SE on charges of Possession with Intent to Distribute a Controlled Substance.

The Blotter is based on the reports posted on June 24thand 25th, 2019 by the MPD to the 1D Listserv and 5D Listserv.