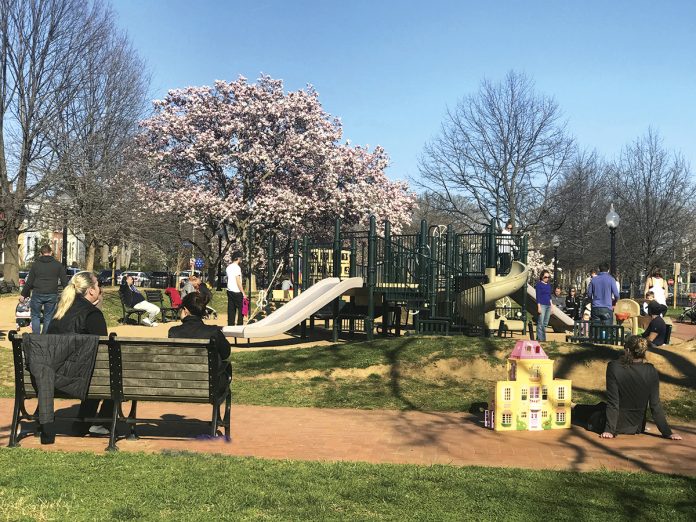 Marion Park is bounded by Fourth and Sixth Streets and at the intersection of E Street and South Carolina Avenue. It is named in honor of a distinguished soldier Francis Marion, the celebrated South Carolina state senator who served from 1782-1790 and earned the moniker “Swamp Fox” for his brilliant stealth tactics against the British during the Revolutionary War. A statue to Francis Marion was authorized on May 8, 2008. However it was met with opposition by some local residents. It was argued that they were not consulted by the federal government on the placement of the statue in the DC park. The figure of Francis Marion is controversial because he fought Native Americans and was a slave owner.

Marion Park was first established as open ground, dating back to the original plans for the city created by Pierre L’Enfant in 1791. Also included in updated plans from Andrew Ellicott, this area has served continuously as a park since its first improvements in 1885. One of the larger parks in the Capitol Hill area, dating back to 1764 (the tract of land was known as Houp’s Addition,) it was originally owned by Jonathan Slater. In 1791, Mr. Slater sold the tract to William Prout, who then had to turn over the land to the federal government soon after.

Improvements that were made by 1886 gave the park an ornamental elegance in the developing neighborhood.In 1887, after the Grand Army of the Republic convinced the Office of Public Buildings and Grounds, OPB&G, to move a statue of Gen. John A. Rawlins from Rawlins Square–then in an undeveloped area of the northwest quadrant—to a better location, the two large vases were also relocated, one transferred to this park. The “large Hilton Iron Vase,” was placed in the center of reservation No. 18, creating a small traffic circle on Fifth Street within the park. Throughout the 1880-90s, the vase was filled each summer with tropical and flowering plants propagated in government greenhouses. The vase was used to direct the flow of traffic through the park due to the carriage paths that created beautiful patterns from a bird’s eye view. In 1963, the vase was removed, and the traffic patterns were redirected outside of the boundaries of Marion Park.

Also in 1887, the park was referred to as Marion Park for the first time, “in honor of the distinguished soldier Francis Marion nicknamed the Swamp Fox who hailed from South Carolina and served his country so gallantly in the war of the Revolution.” Appropriately, the park dedicated to a South Carolinian was located on the avenue named for the state. The neighborhood developed simultaneously with these first improvements in the 1880s, and a majority of the structures built at that time still surround the park.

Today the park is used for quiet reflection with an area for toddlers to play and is a popular place to bring dogs.

Nina Tristani is the co-owner of N&M House Detectives (www.nmhousedetectives.com) and chair of the Capitol Hill Restoration Society’s (CHRS) Communications Committee. For more information on this and other issues of historic preservation, visit www.chrs.org.