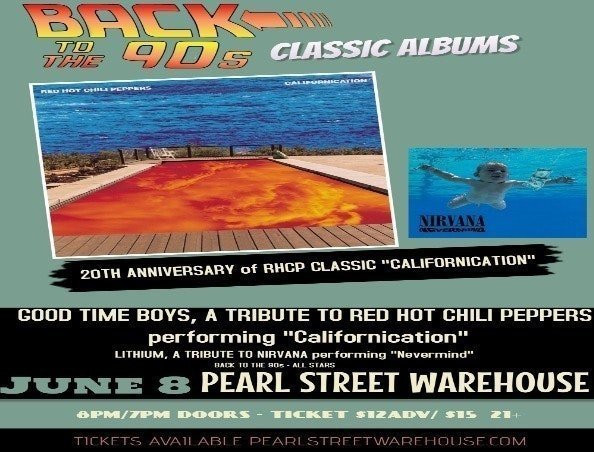 Red Hot Chili Peppers tribute band? I must be getting old. Dig out your flannels. The Good Time Boys take the stage at the Pearl Street Warehouse on Saturday, June 8, to aid in your Californication. Lithium, a Nirvana cover group, renders an assist. So, get ready to smell that teen spirit.

Never heard Go Go? This Friday, The Chuck Brown Band plays at Gateway DC, 2700 MLK Jr. Ave. SE. Bring a picnic and a blanket, but expect not to sit. The free concert is part of the DC Jazzfest’s Jazz in the ‘Hoods program.

Keeping the nostalgia going, remember watching The OC in 2004? You may have heard Rooney, a band that appeared on the show. Led by  guitarist Paul Schwartzman, the group’s well-crafted catchy pop can be best sampled on their 2007 effort, “Calling the World.” After a long hiatus, Schwartzman is touring unplugged as part of a 20th anniversary tour. Catch Rooney at Union Stage on Saturday, June 6.

Wilco tickets go on sale this Friday for an Oct. 15 show at The Anthem. Those on IMP’s Friends with Benefits email blast should get a presale code to purchase tickets this Thursday.

Fans of the Hold Steady should not miss the chance to see Craig Finn, the band’s lead, touring solo at the Rock & roll Hotel on June 15. Finn is touring in support of his new album, “I Need a New War.” For those unfamiliar, Finn’s music is reminiscent of the character portraits in The Boss’s “Greetings from Asbury Park.”

Another June show not to be missed is Dom Flemons at The Hill Center. Best known for his work with the Carolina Chocolate Drops, GRAMMY Winner Flemons is a talented, multi-instrumentalist equally at home on a guitar, harmonica, jug, percussion, quills and rhythm bones. He is touring in support of his album Black Cowboy, which was nominated for a Grammy.

Andrew Lightman is the Managing Editor of Capital Community News. Living a mere stone’s throw from The Anthem, he worships the musical muse at many DC venues.