David Fowler of Sunnyside Farms, a longtime Eastern Market Vendor, has passed. Fowler came down with pneumonia. During treatment at the hospital on Monday morning, Fowler suffered heart failure. He died at 4:00 a.m., Monday May 13. He was 73 years old.

Fowler’s family has been at Eastern Market for five generations and he is one of the few people who knew just about everyone and just about everything about Eastern Market. As a fifth-generation farmer, farming was deep in his blood and he was constantly reading and studying about the subject. He was always thinking ahead of the pack about the future of small farmers, food waste, and any other new topic of concern in the farming community. 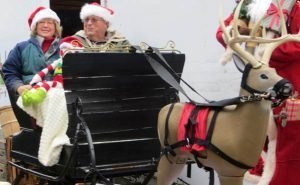 Fowler did not just know about things, and read and study, said Eastern Market Manager Barry Margeson. “Dave liked to talk about Eastern Market and farming and shooting and history and … just about anything and everything. He was one of the most social people I’ve ever met in my life.”

Margeon said that Fowler liked to share what he knew and he loved to share his opinion, which was usually both strong and always well-considered, whether it be conventional or contrarian. He thrived around the exchange of thoughts and the company of others.

The opportunity to interact and connect is what brought him to Eastern Market week after week after week. Many may remember the antique sled Fowler would bring to the market and decorate for the holidays.

Fowler was a fixture at Eastern Market for his entire 73-year life. Those who knew him (and most of the Eastern Market merchants and vendors did) will miss him. He was generous, kind, funny, quirky, and unfailingly honest.

Funeral services took place May 17 in Leonardtown, MD. With the death of Fowler, Sunnyside Farms will no longer be coming to sell at Eastern Market.

Multiple Robberies on Hill Over Weekend