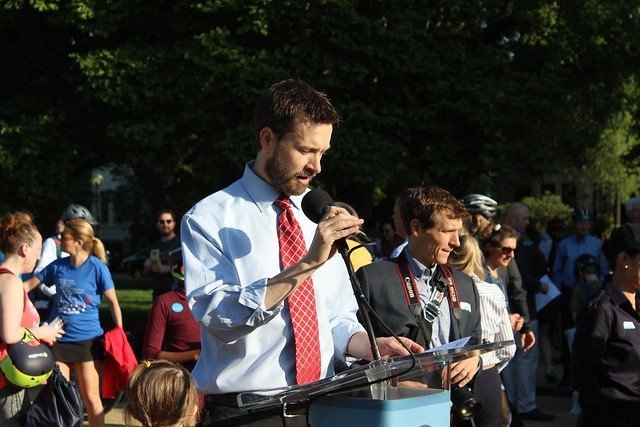 On the weekend of April 19, three people lost their lives on DC roads – one in a car, one while walking on a sidewalk in Ward 8 and one while riding his bicycle on Florida Avenue NE in Ward 6. The cyclist, a well-known neighbor named Dave Salovesh, was killed less than 100 feet from where Ruby Whitfield, another Ward 6 resident, was killed in a crosswalk walking home from church. They died on a six-lane street that feels more like a highway, one that the District’s Department of Transportation (DDOT) has promised repeatedly to re-design for nearly 10 years.

These deaths, all in different parts of the city, have stirred protests from those who have fought for so long to see our streets re-imagined in a way that allows for safe travel if you’re walking, biking, riding or driving. Right now, far too much safety and comfort has been ceded to the convenience of the car over everyone else. Those who walk or bike in this city regularly know there are near-misses every single day that could have just as easily been serious accidents.

At a vigil to remember Dave, a Capitol Hill parent told me he didn’t think of himself as a “cyclist.” But he felt drawn to come to the vigil because he said he simply wants to feel safe riding with his children to get from point A to point B – whether that’s to school in the morning, the library in the afternoon, or Eastern Market on the weekend. A few days later at a vigil in Ward 8 for Abdul Seck, the young man who was hit by a car on a sidewalk, residents spoke about asking for that intersection to be fixed for years. It sounded all too familiar to what I hear across Ward 6.

Following that painful weekend, I introduced emergency legislation to expedite the redesign of Florida Avenue, NE. When agencies miss deadlines, they rarely face consequences – but the rest of us do. This emergency law would put new oversight and accountability on every dollar the Department of Transportation (DDOT) tries to move to other road projects until it completes the long-delayed redesign of Florida Avenue, NE, which has been stalled since 2009. During oversight in February of this year, I asked for an update on Florida Avenue redesign. DDOT reported that design of new Florida Avenue would not be complete until at least December 2020 – yet another delay. Last year alone, DDOT moved $3.2 million in funds outside of their agency. That money could have been used to easily make safety improvements on Florida Avenue or any number of dangerous intersections in the city.

Residents living along Florida Avenue have warned for years that if the city doesn’t take action, someone else was going to get killed. We waited too long. That someone was a father, a husband and a valued member of our community. I’m working on legislation that will force the city to build more complete streets that work for everyone.

In the four years since the announcement of Vision, pedestrian, cyclist and driver deaths have gone up, not down. It’s an alarming local and nationwide trend. Too many streets in neighborhoods in every Ward have gotten more dangerous, not less. It’s past time to treat this with the urgency needed and re-think our roadways to be safe for everyone who uses them – whether on foot, bike, bus or car. The hard work to create transit equity is inseparable from ensuring equity in safety for all road and sidewalk users.

I bike. I walk. I ride the bus. And yes, I drive my car. As someone that gets around in many different ways, it is easy to recognize which of those modes have been prioritized over the others, to our community’s detriment. Several schools, including Gallaudet University, churches, and thousands of residents live along the Florida Avenue NE Corridor. These are thousands and thousands of residents living their lives each day. We need to make sure our streets are keeping each one of them safe