On Friday, May 3, an iconic piece of the Capitol Hill community returns home. Historic Frager’s Hardware returns to 1115 Pennsylvania Ave. SE, to the block where it all began in 1920.

The brightly lit new 8,500 square foot store has polished concrete floors and product arrayed in gleaming, clearly labelled white shelves and distributed over two floors and an outdoor space to the rear. Original exterior walls still stand, as well as the “Frager’s Hardware” sign that was saved to adorn the building again.

The new store was rebuilt at the site of a fire in 2013 that gutted the Hill business and devastated the community. However, the disaster didn’t stop business for long.

“The fire happened on a Wednesday and we were set up doing business on Sunday at the pad across from Eastern Market,” said John Weintraub, who owned the business at the time. “We had to reestablish even the most basic of operations, like setting up a cash register. It was because of the great staff that we were able to go forward.”

“I can’t believe it’s been almost six years,” he said. Weintraub said he always wanted to go back to the site.

Less than a year after the fire, the hardware and rental store opened at the address that would house it until it could rebuild, occupying 5,000 feet in the blue building at 1323 E St. SE. The paint and garden departments bounced around the neighborhood, the latter at three different locations.

In October 2015, Weintraub found an ally to help rebuild the store. Perseus Realty, a DC-based developer, bought the vacant store and lot on the 1100 block of Pennsylvania Avenue and began a redevelopment that included stabilization of the historic facades and construction of a new residential building with street-level retail space, including a new restaurant.

We’re Going Home
After three years of planning and 18 months of construction, Frager’s returns to the address it occupied for 93 years. “We’ll be back in our own space,” said Gina Schaefer, owner of Frager’s as she stocked shelves in the days before opening. “We’re going home.” Schaefer and Marc Friedman operate 11 hardware stores dubbed A Few Cool Hardware Stores (AFCHS), leading members of the Ace Hardware Cooperative.

They purchased Frager’s in 2017 from Weintraub, who along with Ed Copenhaver had owned the business since 1975. Weintraub became sole owner in 2012 but said that “Ed was important to the success of Frager’s up until his death in 2016.”

Schaefer remembered, “I sent John a card [in 2005] when he’d owned Frager’s for 30 years.” She wrote, “when I grow up, I want to be Frager’s.” When Weintraub was ready to sell, he remembered Schaefer’s sentiments. “He came and asked me [about buying the business], and it was the most flattering day of my life, to be honest,” Schaefer said. Frager’s is a gold star in the District’s hardware community, she added – a place everyone knows. “It really just burnishes the aura of A Few Cool Hardware Stores.”

The New Store
The store occupies two floors, at street level and below ground. On the main floor, customers can find the paint department, housewares, cleaning products, pet and party supplies. Downstairs offers the Hello Rental! counter, key cutting, plumbing and electrical, special orders for items such as screens and glass, as well as all the little drawers containing fasteners such as nuts and bolts. 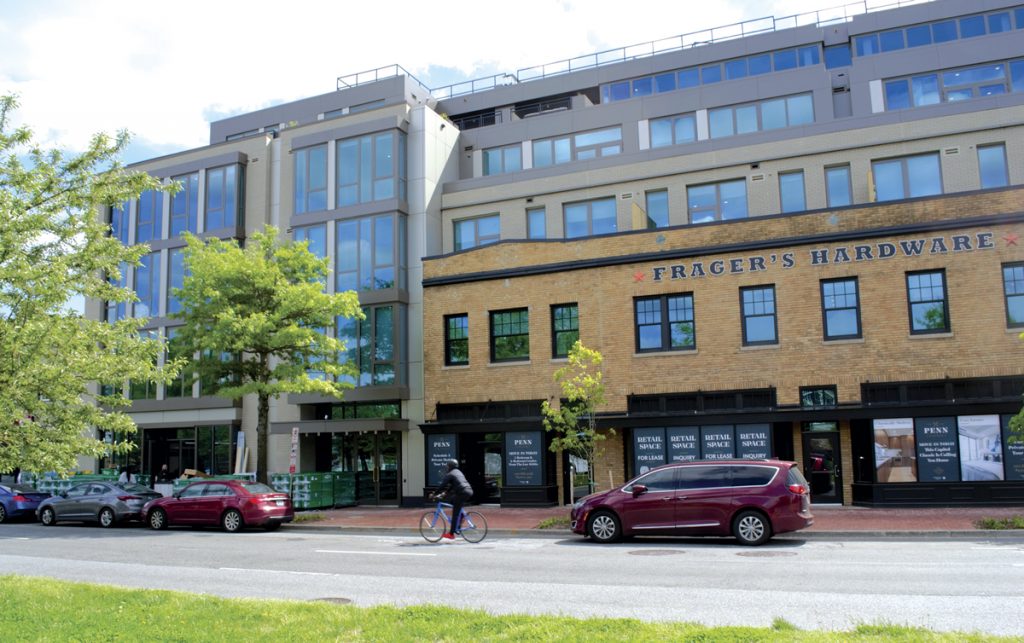 Staying the Same
The store, previously a True Value Hardware under Weintraub, is now part of the Ace Hardware Cooperative. “A cooperative just allows us to compete with big-box retailers,” explained Schaefer. “It allows us to keep our pricing competitive.”

Schaefer and Friedman have emphasized consistency during the transition in ownership. Acquiring the business at a time of tremendous change, they have maintained a similar selection of products and many of the familiar faces. Cashier Cary Caldwell has been with Frager’s Hardware for the last 10 years of her 39-year career in hardware. “The employees are kind of like a family – we call ourselves the Frager’s family,” she said.

It is a large family, at that: store manager Aisha Bryant said that about a third of the 30 or so store employees have been with Frager’s since before the fire. All will make the return to Pennsylvania Avenue in May.

Maintaining the connection between Frager’s and the community has been important to Schaefer and Friedman. Traditions such as the fall festival and Santa’s visits to the garden center continue. “All of the activities the community has grown to love over the years will now be together on one block,” Schaefer said.

Involved in the Community

AFCHS continues Frager’s relationship with the Capitol Hill Community Foundation and also with the House of Ruth, a program that helps women escape domestic violence, among other local philanthropic ventures. “We give a little to a lot of people,” Schaefer said. “It’s all about being involved in the community and getting to know the next generation of shoppers and residents.”

The store will carry more product made locally in DC, as well as pieces for historic homes and special orders. For example, local card-makers will be featured in a gifts section alongside items from Capitol Hill confectioner Capital Candy Jar (201 15th St. NE).

One change is in the rental company. Hello Rentals! relaunched this spring as the only independent equipment and party supply rental company in the District, with “revamped inventory and pumped-up customer service,” according to manager Charlie Hawkins.

Operating out of Frager’s, Hello Rentals! has two warehouses full of items to fill party rental needs such as tables and chairs, place settings, tents, audio equipment and karaoke machines. It also carries small and large power tools, from drills to lawn tools, heaters and pumps, to larger items such as scaffolding and Genie lifts for the DIY homeowner or contractor.

The team is proud of their ability to adapt to consumer needs and maintain traditions and community connections. “Frager’s is almost 100 years old,” said Caldwell. “We were kind of afraid we might not make it when the fire happened, but it looks like we will.” Caldwell added, “The community was all behind us, and that’s why we could rebuild.”

Despite some challenging moments, Schaefer said, there was never any question that the store would be coming back home. “What’s more synonymous with Capitol Hill than Frager’s on Pennsylvania?” she asked. “It’s like a new beginning. We’re not going anywhere.”

Also visit Frager’s on Saturday, May 4 and Sunday, May 5, from noon to 4 p.m., for the store’s Annual Garden Party. Enjoy pop-up markets, sales and giveaways. All are welcome. An official grand reopening celebration is planned for sometime this summer.