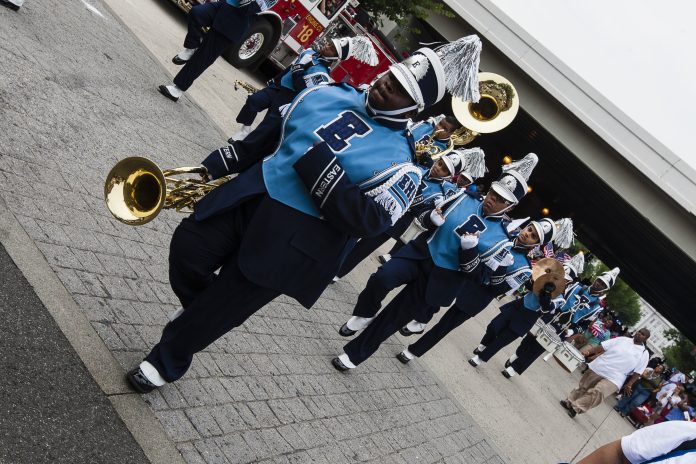 Eastern High School’s Blue and White Marching Machine — consistently ranked one of the best marching bands in the mid-Atlantic — received a well-deserved boost this month with the receipt of a $20,000 Arnold F. Keller Jr. Grant from the Capitol Hill Community Foundation (CHCF). The grant recognizes the outstanding commitment of the band’s student members and all-volunteer leaders and instructors by responding to the urgent need to repair and replace its aging instruments.

Led by director James Perry, assistant director Steven Smith, and dance coach Jamie Williams, the band provides musical instruction for 60–80 students from Eastern High School, Eliot-Hine Middle School, and Miner Elementary School. Just as important, participation in the band helps instill discipline and pride. Band members attend music instruction and band practice for two hours every day after school, as well as Saturday sessions a few times a month and entire weekends of practice to heat up for a performance. As Perry often reminds them, “It’s never given, but it’s always earned.”

Since its founding more than 40 years ago, the band has performed about 40 times each year, including appearances in three presidential inauguration parades and dozens of events such as the National Football Hall of Fame parade, the Teach for America convention, opening of the Southwest Waterfront Wharf, Washington Capitals Championship Parade, and the Hill’s own Fourth of July parade. About 25 of the students also perform in the school’s concert band, while smaller groups play in the symphonic band, jazz band, and pep band for sports events.

In a testament to the band’s impact, more than 90 percent of its graduating members go on to college, and all who have applied to join the band in college have earned a scholarship — even if they didn’t major in music. “The Eastern High School name carries value,” says Smith. “We use our connections with HBCU band directors, and they know they’re getting a quality musician.”

Smith himself is a prime example of the band’s success. He began playing the trombone as a student at Hine Jr. High and then joined the Eastern High School band, earning a full scholarship in music at Howard University and Coppin State University. Even as a college student, he returned to volunteer with the band, and today he serves as the high school’s registrar as well as the band’s assistant director. Anthony Dukes, Jr., is another great example: After graduating from Eastern in 2016, he eventually earned a $56,000 scholarship to Jackson State University and has become a proud member of the Sonic Boom of the South.

“The foundation has long appreciated the band’s remarkable contributions to education and school spirit,” said Wayne Warren, a member of the CHCF board of directors and of its Keller Grant committee. “But we only recently learned that the dire condition of many band instruments — some of them up to 20 years old — was limiting student participation. The Keller Grant will go far in upgrading the band’s instruments, and we’re rallying the community to pitch in for additional instruments and new uniforms as well.”

D.C. Public Schools issued the original instruments for the city’s four school bands, but after that their purchase and repair has been the responsibility of each school. Eastern High School needs to refurbish about 60 instruments, from tubas to piccolos. However, some of the instruments are beyond repair, and the band needs to add new instruments to balance its sound. One sousaphone can cost up to $7,000.

Chuck Levin’s Washington Music Center is providing a discount to Eastern High School to repair the instruments, and the Keller Grant will fund repairs for as many instruments as possible. But CHCF’s support won’t end there.

To continue repairing instruments and provide an additional $90,000 to replace the band’s 10-year-old formal uniforms, the foundation is creating an online community campaign to raise additional funds and solicit donations of instruments. The National Capital Bank will help spur contributions by matching the first $10,000 donated to the campaign.

“The Blue and White Marching Machine is one of just four high school bands remaining in the D.C. Public School System,” Warren noted. “We owe it to the dedicated students and instructors who uphold its proud tradition to provide quality instruments and uniforms that let their talent and hard work shine.”

Capitol Hill Community Foundation grants, totaling about $300,000 a year, are entirely funded through the contributions of residents, businesses, and friends of Capitol Hill. Every dollar raised is donated to organizations that enhance the community’s children’s education and youth programming; social services; arts, culture, and recreation; and neighborhood beautification.

To learn more about the foundation and the campaign to support the Eastern High School band, visit www.capitolhillcommunityfoundation.org.