The night was frigid, but visitors from Capitol Hill United Methodist Church (CHUMC) and Ebenezer UMC received a warm welcome at the 1D1 police station for the annual Police Valentine Tribute. This was the 20th year that church folks had come to the police station with food, gifts, and festive decorations to say thank you for the officers’ tireless efforts throughout the year to keep the community safe. Shortly after arriving, the group gave a cheer and sang a song that mentioned many of the 1D1 officers who were present. As officers heard their names they laughed and hooted with pleasure, marveling at how their names were woven into the Michael Jackson hit, Billie Jean.

The song was written by CHUMC member, Carol Anderson, who has organized the tribute for the past 20 years. It was a labor of love for her and the group recognized her work with a poem and a photo montage capturing scenes from previous tributes.

Ward 6 Councilmember Charles Allen penned a “Congratulatory Greetings on the 20th Anniversary of The Annual Police Valentine Tribute,” which was delivered by his general counsel, Nichole Opkins. “What started two decades ago as a way for church members to show appreciation to our Capitol Hill officers during the worst of winter has blossomed into a special annual tradition,” he wrote, noting that as the neighborhood has grown so has the Valentine Tribute. Allen, who is Chair of the Council Committee on the Judiciary and Public Safety, appreciated the tribute as an “opportunity to make our community more connected, more compassionate and more generous,” and he recognized Anderson’s dedication and creativity in bringing church and police together over the years. Anderson, stunned by the unexpected accolades, thanked everyone for their kind words and the opportunity to serve but also was grateful for the years of service from many others. 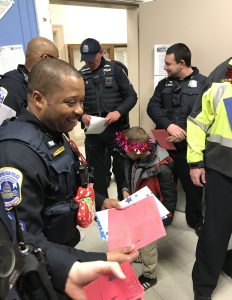 First District Commander Morgan Kane greeted the church friends and said, “This is a unique occasion. You come without a question or a complaint. You just come to say thank you, and in our experience that is very rare.”   She spoke of the importance of the police knowing community and church members. She said crimes are solved or prevented when the police and community work together. Captain Pulliam, newly appointed to 1D1, was experiencing his first Valentine Tribute and expressed his appreciation to the churches.

CHUMC Pastor Alisa Lasater Wailoo spoke for the churches, saying that getting to know the 1D1 officers and being able to call on them when there have been emergencies or simply everyday problems has been invaluable. She invited them to come to CHUMC for the daily breakfast that CHUMC serves unhoused neighbors and join in the fellowship.

The event ended with Pastor Sims talking about the gift of faithfulness and showing the cards that CHUMC children had made especially for 1D1. Then the kids threaded their way through the tall trees of uniformed officers, handing out Valentines and bedecking them with tinsel leis and other gifts.

Finally, happy citizens said goodnight to happy officers and walked back into the rain, both eager to start the next decade of tributes.