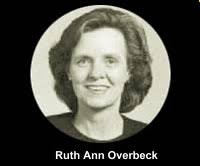 Ward 6 Democrats are continuing their recognition of Women in Ward 6 by honoring Ruth Ann Overbeck, a Capitol Hill historian and teacher. The initiative, in partnership with the National Woman’s Party and the Hill Rag, will culminate in the 2020 100th anniversary of the ratification of the 19th Amendment, which gave women the right to vote.

The Women of Ward 6 initiative is a non-partisan recognition of Ward 6’s women, which honors women who have worked or lived in Ward 6 and who have made significant contributions to better our lives and Ruth Ann Overbeck is an important one.

Overbeck, who died in April of 2000, is buried in Ward 6’s Congressional Cemetery. Her gravestone, by design, has no birth or death date. Instead it is engraved: “Look it up!”

Overbeck bought her house on Capitol Hill in 1968, a few weeks after the riots following the assassination of Dr. Martin Luther King – a time when many people were fleeing the city. She spent the next 30 years restoring her home as well as building a historical research business. She doggedly mined the community for oral histories, photographs, maps and other documentation and thus contributed a wealth of information about the neighborhood’s history.

She chaired the original effort to define and establish the Capitol Hill Historic District. She researched hundreds of house histories for homeowners and designed and conducted more than 35 DC walking tours for the Smithsonian Resident Associates on various historic themes.

Thus it is appropriate that the Capitol Hill History project is named for her. An initiative of the Capito Hill Community Foundation, the Overbeck Project preserves and publicizes the history of the Capitol Hill community by recording the recollections of its longtime residents, presenting history lectures and promoting historical research.

Overbeck received both her B.A. and her M.A. from the University of Texas, Austin. But ironically, she was not allowed into a PhD program — because she was a woman.

Want to nominate a woman to be honored as a Woman of Ward 6? Here’s the nomination form:  https://www.ward6dems.org/women_of_ward_6_nomination

Updated: Man Attacked for Scooter in Southeast as Witnesses Watch