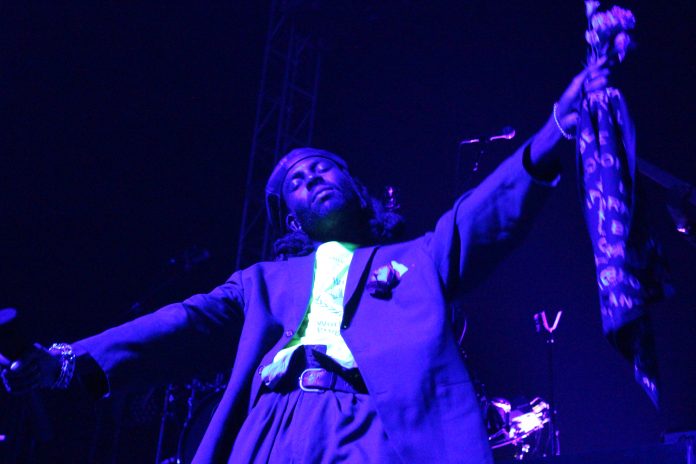 Dev Hynes stands in the back. Though it is his music—as Blood Orange—that reverberates through a crowd peppered with asymmetrical hair cuts and red plastic cups, he is slouched up against the platform on stage in a too big black suit, ceding the spotlight to Eva Tolkin and Ian Isiah who unleash full, glassy spools of vocals upon us. It is hard to tell whether he is the main attraction or backup watching from the wings.

Hynes is a relaxed performer onstage, stepping back often to allow his backup singers, if they can even be called that, to carry deft and emotional renderings of his tunes. On “Hope,” while Hynes recedes to stage right blending into the background to freestyle on the piano, Tolkin and Isiah solo and duet providing lush vocals and evocative harmonies. Their voices are a balm—like shaved ice on a hot summer’s day. On “Best to You,” just as good live as it is on the album Freetown Sound, Tolkin’s voice cuts a warm knife through the silent air before the fast paced dance beat drops. Tolkin and Isiah sing to each other dancing back and forth across the stage. Still Hynes is a powerful presence providing the back bone of the song, his fingers dancing double time over the keys providing the tinkering melody.

When Hynes does take the spotlight he is in full command. He vogues across the stage toying with his Blood Orange branded bandana, in one moment coy using it to hide his face and in the next bold, striding energetically back and forth. My friend, a new comer to Blood Orange, notes on his arrival on stage the crowd is electric for him. She’s right. Singing every word to every song, waving around their own bandanas, this crowd is his.

At times, Isiah’s presence is so full of silent charisma and charm that it seems as if he should be headlining a tour of his own. Often, he is hamming it up—pantomiming to people in the audience, doing air bass and swinging his hips side to side, singing and pointing to a fan recording him from below. At one point during the show when Isiah lets loose his gospel falsettos on “Holy Will,” people’s hands reach toward him, some of them shaking and spasming as if they are actually being moved by the holy spirit. And in the end as the funky bump and grind beat begins and the synths start to pierce the melody, Isiah swoops in to sing above them with one last dollop of gospel sour sweetness.

Hynes’s willingness to work on the periphery of the stage feels less like a drawback and more like an extension of his commitment to collaboration. There is a generosity to the way he acknowledges and allows the vocalists who bring his work to life to take their rightful place up front with him. And we are always eventually drawn back to Hynes, sometimes through his sheer instrumentality alone as he show-boats up and down the piano scales or closes out a song with a blurring fast guitar riff.

Whether Hynes is front and center or not, the affection the performers have for each other radiates throughout the set. It is like the best jam session to which you were ever invited. The whole band clearly has love for Hynes and what he has created—they dance and egg each other on, mouthing all the lyrics when they’re not performing. Towards the end of “Charcoal Baby,” Tolkin and Isiah excitedly begin to stomp their feet and cheer as Jason Arce rips into a flute solo that peals out the closing notes.

The set ends with “Smoke,” the softly shifting acoustic guitar piece that closes Negro Swan. Tolkin and Isiah flank Hynes who plucks at an acoustic guitar. Though Tolkin and Isiah wash the room in their celestial vocals, it is Hynes who begins the main and last refrain of the song. “The sun comes in, my heart fulfills within,” Hynes sings in his gentle falsetto. Tolkin and Isiah chime in and begin to sing over him in tones of sadness and hope and rejoice that leave you breathless. And Hynes, ever the maestro, sits back and watches his creations spin out over the crowd.

Miranda Jetter writes about all manner of noise in Washington, D.C. You can find her at @Mirandajetter on Twitter trying to keep up with the most recent memes.