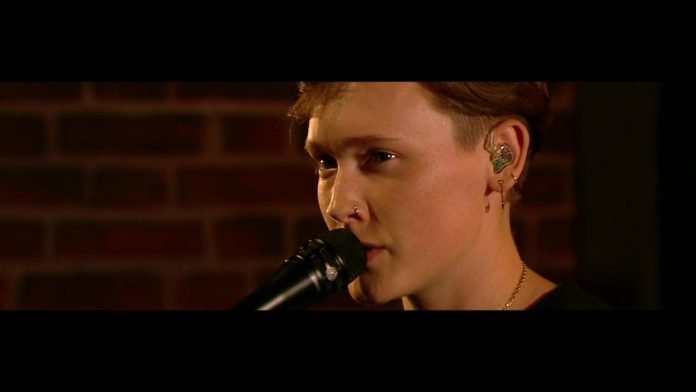 “You are now entering the southbound train to Grim Town. Please surrender any faith, passportation, or optimism to platform staff if you haven’t already.”

The voiceover wafts through the speakers as SOAK and her band walk on stage. For tonight Grim Town is located in the basement of Songbyrd Music House; a long, low room with chipped blue-white tile floors and two church pews lining the back walls. The audience is so close to the performers that they could reach out and touch them.

“Refreshments will not be available on this service. Thank you and enjoy your journey,” the voice concludes.

Soak and her band launch into “Get Set Go Kid” an anxiety ridden sprint of a song. It is a stand out of the show, with Tom McLaughlin laying out mesmeric guitar riffs and a hypnotic melting melody. As the song builds SOAK sings, “You ignore my presence / not even your eyes blink / when I ask you a question”, her hands pressed over her face, the red and purple stage lights glinting off her ring. She ignores the crowd as she sings, mimicking her own lyrics.

We are on a journey here tonight, indeed.

With the two years between this album and her last SOAK seems to have embraced a meatier, more rock and pop influenced sound to communicate her contemplative, confessional lyrics. Her last album was produced by McLaughlin, her touring guitarist, producer, and member of the fellow Irish band Villagers. The result was something elemental and acoustic. On her new record SOAK employed the talents of Ant Whiting, a producer with more pop focused roots.

It seems so far as if that change may signal a departure entirely from the atmospheric, hazy cuts off her first album. They certainly don’t emerge much on stage perhaps because they don’t fit the raucousness a concert demands. Hopefully all traces of those wandering, haunting tracks aren’t absent on Grim Town.

One of the highlights and perhaps the strangest moment of the show comes when “Oh Brother” from the album “Before We Forgot How to Dream” is played about two thirds of the way through the set. It is a moving, almost orchestral song where SOAK’s voice just barely arcs over the instruments.

At one point all the performers have their backs to the audience or are obscured onstage; so caught up are they in weaving their net of sound, full of gritting guitars and a pounding beat. SOAK kneels on the ground with her guitar facedown playing directly into loop pedals stopping and starting every few moments to fine tune the noise.

It is a strange and offbeat gesture in a show littered with them: the hands over the eyes, a BBC documentary on frogs playing on a screen behind the band for the duration of the set (They could not resist using the projector once they knew it would be there.). Yet, the quirk that SOAK and her band bring to the performance is for the most part funny and endearing.

Before she breaks into “YBFTBYT” an ode to aimlessness, she talks about the impetus behind her new album. She looks at the audience, and says, “I just did the thing where you don’t remember who you are for a while”. She tells us how the songs she made for Grim Town helped lead her out of her confusion and depression.

SOAK is talking to us about the feeling of growing up yet not feeling grown. A disconnect that is both universal as well as acutely felt by the millennial generation whose adulthood is no longer marked by the typical milestones—houses and marriages and children. She sees and sings the small flailing attempts at a new and unfamiliar adulthood—the party that should feel good but instead feels anxiety-ridden, the well planned valentine’s date that ends with bitterness and a break up. These moments don’t amount to failure in SOAK’s songs but rather as evidence of continued growth. As she sings on “Life Trainee”, a “Fountains of Wayne” tinged anthem about not having it together, “Let’s be honest/ I’m a work in progress.” We are all works in progress and the growing up part is never finished. SOAK is here to remind you of that and offer up the immeasurable gift of being seen.

Grim Town is out April 26th.

Miranda Jetter reviews popular music for the Hill Rag. Find her at mirandajetter@gmail.com.