On day 33 of the government shutdown, affected families had one less thing to worry about. More than 80 affected people had dinner courtesy of Hill organizations and businesses, all organized by Hill resident Allison McGill through her #ShutdownMeals effort.

It is the second time McGill has organized meals for furloughed workers and those affected by the government shutdown, including federal employees but also contractors, nannies, security personnel, janitorial services and any other affected worker.

McGill, the founder of Lazarus Ministries, is also the spouse of a federal worker currently deemed essential and working without pay. She said the effort was as much about morale as it is about need.

“I’m not as affected as most,” said one furloughed worker, who asked not to be identified. “But if this goes on much longer, it’s going to get bad for us.”

“It’s just so wonderful that the community recognizes that this is a struggle and is stepping up to show that they’re here for us,” she said.

Commissioner Denise Krepp (ANC 6B10) said that was exactly why she and her daughter had volunteered to help with the dinner.

“The suffering is emotional and financial, and we wanted our neighbors to know that the Capitol Hill community supports them,” she said. “Borrowing a phrase from my military days, we have their back.”

Two other volunteers included Nancy and Maricruz, who will be featured in a Jan. 30th episode of An Imperfect Union on Facebook Watch. The two women — one a Trump supporter, one not so much — have differing views of the cause of the shutdown, but say they volunteered to show that we could work together to help those affected despite our differences.

Hype Cafe owners Samuel Menguistu and his fiance Hanna Tesfamikael contributed cookie desserts to the meal, as well as opening their cafe for meal distribution on Thursday evening. The cafe has been offering federal workers free coffee for most of the shutdown and Menguistu said he wished that they could do more.

“It warms our heart to be able to do something at least,” he said, “I wish we were an established business, or for a long time in business so we could do more. But we’re going to give whatever we can,” he said.

McGill said the outpouring of community support continues to be incredible. One couple particularly devastated by the shutdown was treated to an anniversary dinner at Ambar Capitol Hill.

Ambar’s General Manager Uroš Jojić said that the restaurant had participated in Shutdown Meals for a second time in part to continue the Balkan tradition of helping people through hard times. “We know that they are stressed out and frustrated by these missing paycheques,” Jojić said.

He said that he knows many of his customers used to go out once a week, and he wants them to be able to live their normal lives. The restaurant has good relationships with many people in the community, and was happy to follow McGill’s lead to help where they could, he added.

“These are our customers, and our community,” Jojić said. “They have given us support for the last seven years, and we want to return the favor.”

McGill says she’ll keep organizing until the shutdown is over. Next, she hopes to supply items on Superbowl Sunday for affected families, with containing everything needed as families view the game: wings, pizza, and maybe beer. She is currently looking for partners for that project.

“But my biggest hope is that the government re-opens, and we can all get back to our normal lives,” she said. 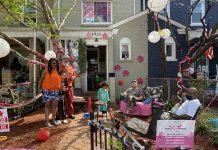 H Street FRESHFARM Market is Back