Allison McGill says it is as much about morale as it is about need. The Hill resident is organizing free carry-out meals for workers affected by the federal shutdown, to be distributed Jan. 24th. Federal employees and contractors are welcome, as well as nannies, Uber drivers, security guards and janitors.

“We wanted to go beyond federal workers, to people who are being affected and aren’t getting as much attention,” she said of the event’s inclusion.

Meals will be distributed starting at 7 p.m. at Hype Cafe (1129 Pennsylvania Ave. SE).

Monday, Jan. 21 is the 31st day of the current government shutdown, the longest in history. 800,000 federal employees have not been paid since late December, although many, deemed essential, are still working.

McGill is an inspirational speaker and founder of Lazarus Ministries, a non-profit that fosters kinship with homeless individuals and provides training, education and collaborative opportunities. Her husband is a federal employee, still working because he has been deemed essential during the furlough.

McGill organized her first distribution of meals on January 14th at Skillzone (709 Eighth St. SE), which provided the space and staffed the event. 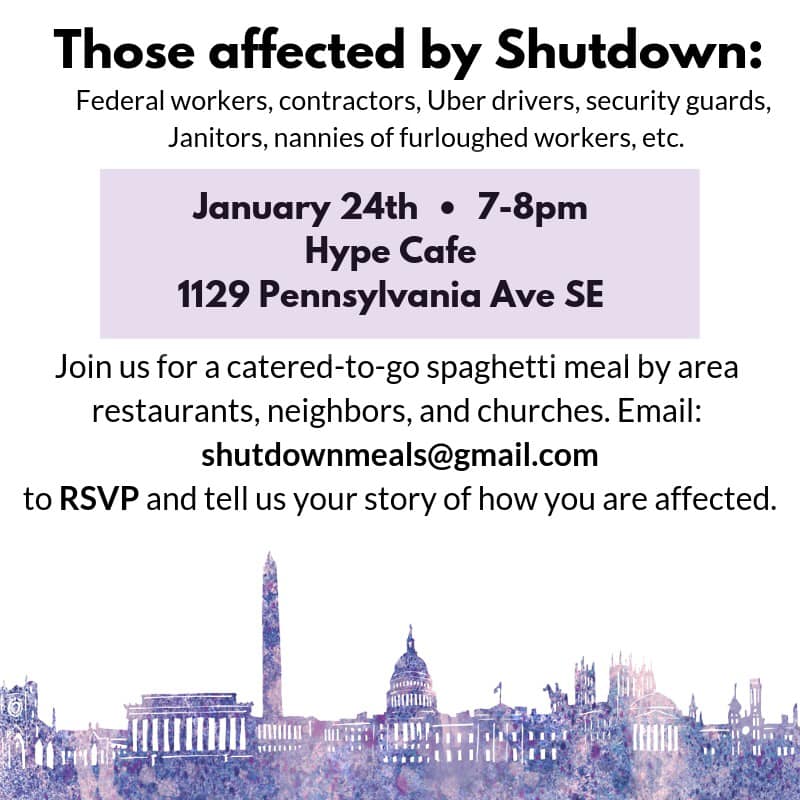 “The outpouring was incredible,” McGill said of the community’s contribution to the first event. On the evening of Jan. 14, 80 affected families received meals from local restaurants Ambar (523 Eighth St. SE) and Cava Mezze (527 Eighth St. SE), in addition to $15 gift cards from Trader Joe’s (750 Pennsylvania Ave. SE). East City Bookshop (645 Pennsylvania Ave. SE), realizing that furloughed workers might be getting bored, supplied a selection of books for readers to choose from.

Co-Founder of Skillzone Liza Fox said that many members of the Elemeno Club were affected, and they wanted to help. “In addition to working with our members on special financial arrangements to help in this uncertain time, we wanted to be involved in helping the broader community as well – so we jumped at the chance to support Allison,” she said.

McGill said that in addition to offering to prepare 150 meals for dinner, the folks at Ambar provided an additional 75 gift cards, allowing families to get lunch at a later date, as well. General Manager Uroš Jojić said that generosity and helping in times of need are part of the Balkan tradition, and those affected by the government shutdown are part of their community.

“We understand that not receiving paychecks can be very frustrating and can affect a lot of families so wanted to help them as much as we can,” he said. “People affected by government shutdown are our guests. They were giving us support in the last 7 years and we just want to show them appreciation and offer them help and support when they need it.”

The outpouring from the community was so great that McGill and her team was also able to prepare 150 lunches for Transportation Security Administration (TSA) workers, distributing them the next day to employees at Ronald Regan National Airport.

Now McGill is doing it again. From 7 to 8 p.m. Thursday, Jan. 24, families can pick up a catered to-go spaghetti meal provided by area restaurants, neighbors and churches at Hype Café (1129 Pennsylvania Ave. SE).

McGill said the gatherings are about keeping morale and dignity up within a group of people who are tiring of being used as “pawns.” She said she has a gift for organizing, and this was a way she thought she could help alleviate stress during the furlough.

“I intend to keep at it until the shutdown ends,” Mc Gill said.

McGill encourages anyone affected by the shutdown to email her to RSVP and tell the story of how they are affected. Businesses and grocers interested in supporting her efforts should also email McGill at [email protected]

Phase I of Eastern Market Metro Plaza This February