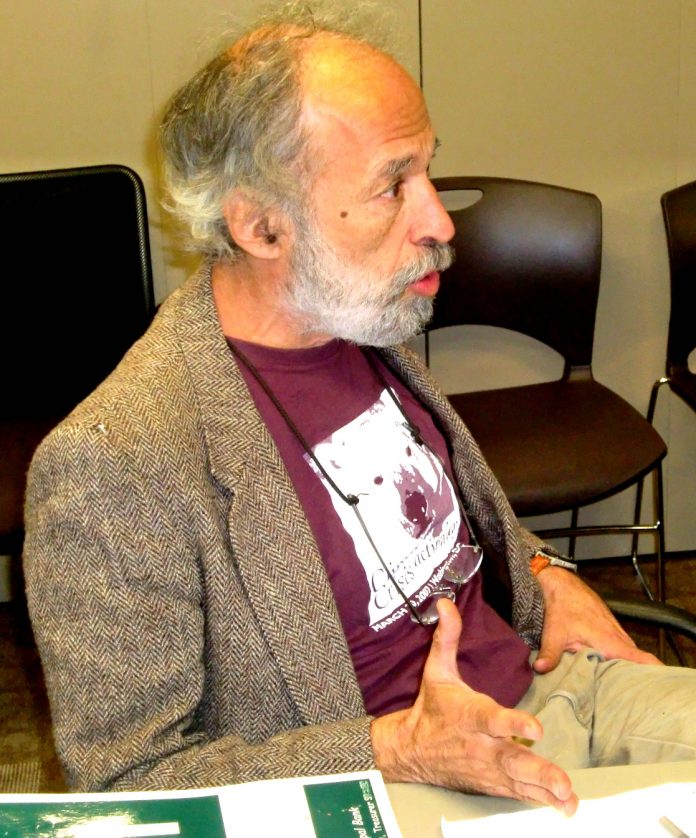 Candidates who attended the Oct. 10th At-Large Forum organized by the Hill Rag and the Ward 6 Democrats were asked to answer the questions from the audience and the Internet that were not addressed due to time constraints. Here are answers provided by David Schwartzman, The DC Statehood Green Party candidate.

Would you support funding in DC Schools to train school leaders and teachers about mental health options for students and their parents?

Yes, of course. This is a priority, given the stress experienced by so many residents who are now living in unaffordable housing, and families living in poverty.

I strongly support this visionary bill, and have so testified as a climate scientist. Definitely not nuclear energy, use solar/wind power for 100% renewable energy by 2032, even sooner is better. We discuss this issue along with climate change, in our recently published book, “The Earth is Not for Sale”.

Is DC doing enough to protect residents from lead contamination in tap water?

Not at all! DC government is not transparent about their protection program, but we know that residents living in public housing are very likely still drinking water with lead levels which are especially harmful to children. As a geochemist, I did research on lead pollution in DC.

State your position for non-partisan elections in DC.

I support the present primary system, but the cap should be lowered on campaign contributions as voters so favored in Initiative 41, repealed because of Councilmember Jack Evans’ opposition. The DC BOE should provide information about candidates’ positions. Looking forward to the public option being implemented for the 2020 election.

Expand a free electrified bus and minibus service to these underserved neighborhoods, financed by progressive taxation of residents, the corporate sector adjacent to Metro lines, as well as by a congestion charge in the downtown business area (already planned by MoveDC). These measures are consistent with the Home Rule Charter.

Where should bikes, scooters and minibikes should be allowed? How do should DC regulate them?

Mainly in dedicated bike lanes on heavily trafficked streets. I favor a free license registering these modes of transportation.

Do you support a local alternative for housing DC’s incarnated [sic] citizens? Should the District build a local prison?

Yes to both questions, incarcerated citizens should be held locally to facilitate family and friends visitation.  In addition, bring the Parole Board under DC local control.

What can be done to guarantee Barry Farms residents a right of return? How should the qualifications for return be structured?

First, this legally binding contract must be made: all residents now living in Barry Farms and those already displaced should have a right to return at the same rent as they previously paid, plus with the same number of rooms, comparable size. Implement the Resident-led Equitable Community Development Plan!

Do you support the changes to the comprehensive plan proposed by the Mayor?

Not at all. Rather the comprehensive plan should be strengthened with strong language for truly affordable housing, environmental justice. I am a member of the Grassroots Planning Coalition (Empower DC) to achieve this goal.

What can you do to develop vocational education in the District?

Both vocational and apprenticeship programs should be provided in DC high schools, but with an emphasis on 21stcentury employment, e.g., in the solar industry, energy conservation, and of course IT. Partner with business and unions. I will be committed to implement this goal once elected.

What initiatives do you support to close the educational gap between African American and other students?

David Schwartzman is running as The DC Statehood Green Party candidate for the At-Large position on the DC Council. For more information on his position, visit their website.