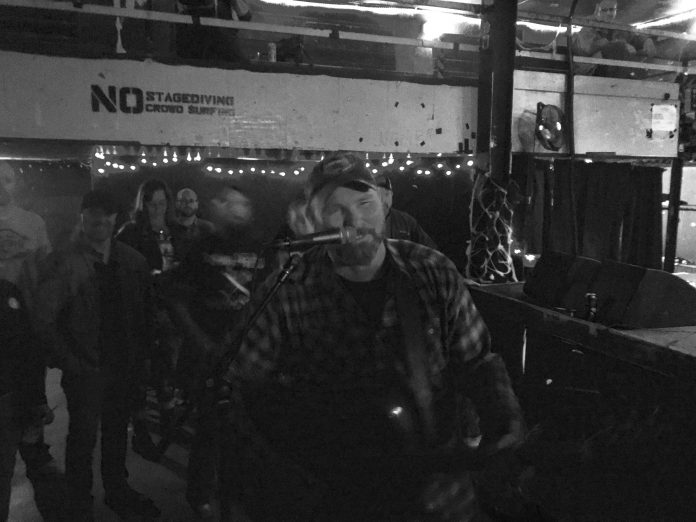 Waiting in the crowd to see Brian Fallon last spring at the 9:30 Club, I was surprised when a big bear of a man dressed in flannel and a trucker hat stepped on to the stage to open. Armed  with an acoustic guitar, Tim Barry launched into “Dog Bumped,” the story of a friend who took the blame when his sister killed an abusive husband:

One quick minute got me 28 long years.
I would do it again, I don’t regret it.
He laid his hand on my sister too many times when I was near
And, I shot him dead and I don’t care.

While Barry’s raw delivery initially silenced the crowd, it thunderously joined him to sing the chorus: “My sister fucking shot him dead beside his car.”

Barry grew up in Reston. He fronted Avail, an RVA-based hardcore outfit from 1988 to 2008. With their powerfully raw shows, this gritty, punk quintet attracted a devoted following. In 2006, Barry released his first solo project, “Rivanna Junction,” stepping into the role of singer-songwriter. He has released four more studio albums and two live compilations including his most recent “High on 95” in 2017.

In his songs, Barry chronicles his struggles with addiction and depression. He extols a simple hobo’s existence of simplicity and wandering. Critical of consumer spending excesses, he peppers his songs with the details of working class lives: calls from debt collection agencies, prepaid cell phones and couch surfing. He lovingly details the life stories of friends, neighbors and family. And, in the tradition of Woody Guthrie, he narrates adventures of a life lived on the road.

Baltimore’s Ottobar, 2549 N. Howard St., www.theottobar.com, defines the term “dive.” With nearly no outdoor signage, exposed wood walls decorated with concert posters and stickers, it is divided between a bar and a non-nonsense performance space comprised of a floor, side benches and seat balcony. The main decorations are signs prohibiting crowd surfing and stage diving.

The Ottbar formed the perfect backdrop for Barry’s talents. Unlike the much larger 9:30 Club, its stage is segregated from the floor by a rope or rail. So performers can step down and walk right into the audience. Barry took advantage of this, performing several songs standing in the midst of the crowd.

Stepping on to the stage at around 10 p.m., Barry played until stopped by the club’s 11:30 p.m. curfew accompanied very ably his friend Josh Small, who played a mean lead guitar and backed his vocals. Most of their selection was from Barry’s most recent album such as “High on 95”, but he reached back for old favorites like “Dog Bumped.” Small himself shined on a stunning cover of Bonnie Raitt’s “Angel from Montgomery,” which left some of the young audience members slightly puzzled.

Barry’s sardonic and often brutally self-reflective lyrics were on display front and center at his Ottobar show. In “Avoiding Catatonic Surrender,” a personal favorite, Barry narrates his life as a singer-songwriter:

It’s lonely in the Garden State, the place of no left turns
In a motel 6 in East Brunswick smoking till my lungs burn
I put ice in the trash can to cool down my beer
Breathe in the perfume in the room of the person last here

His frustration with his life and his muse rages:

It is more than just personal, he is at war with the world:

I throw empty beer cans at the TV when I’m watching the news
I hate republicans, I hate democrats, I hate liberals too
I think pacifists are weak, and violence is wrong
But I go limp for police and I fight when it’s called for.

Despite being unable to find a solace in his music, he still embraces his craft:

The truth is I don’t know or care with who or where I fit in at all
But I keep on living simple, riding fast and living slow
I write standard boring songs with boring standard chords
Just like the best and the worst, verse chorus, verse chorus, bridge, repeat

Standing tall in the middle of the Ottobar floor, Barry cast a spell on his audience.

“Honesty” and “authenticity” are two words often abused by music reviewers. Just as Barry cannot escape his demons or life on the road, this reviewer cannot avoid applying them to Barry’s riveting performances. Walking a trail trod by the likes of Dylan and Guthrie, he truly is “The Bard of RVA.”