Back to the Farm
Things once looked dire for family farms in Montgomery Country. A variety of factors over the years contributed to a loss of more than 70% of the farmland—but happily, it wasn’t too late. In 1980, a group of citizens, farmers, politicians, and planners set aside a 93,000-acre expanse in the northwest crescent as a reserve. That area is the subject of a new book, “Bread & Beauty: A Year in Montgomery County’s Agricultural Reserve.”

Authors Claudia Kousoulas and Ellen Letourneau have created a glorious tribute to the farmers, past and present, who have made this region such an integral and productive part of our local food chain. They tell the stories of those who have maintained family farms for generations as well as those new to farming life.

From sheep and dairy farmers to beekeepers, lavender growers, and brewers, each has a distinct perspective, but all express a deep love of the land and of the work that they do. As Caitlin Robinson, a flower farmer, says, “I’ve always been happiest when my hands were the dirtiest… the privilege of watching things grow makes my heart swell.”

Many of the farmers have also contributed to the book’s 120 recipes, with dishes ranging from a hearty winter beef and beer pie to a summery succotash, and from a fall vegetable cobbler to a springtime mutton sausage. Complete menus—for a winter picnic, a fried-chicken feast, a spring lunch in the park, and a Thanksgiving dinner—pull together each season’s delicious offerings.

With its rich combination of food, people, history, breathtaking photography by George Kousoulas and Martin Radigan, and thoughtful essays (the authors don’t shy away from controversial subjects such as the role of slavery and the ethical issues involved in eating meat), “Bread & Beauty” is sure to fulfill the authors’ wish that it provide “a lasting (and hopefully stain-spattered) record of the people, places, and flavors of the Agricultural Reserve.”

Claudia Kousoulas is a Capitol Hill writer and editor whose freelance work covers architecture, design, cooking, and culinary history, and who worked as a land use planner in Montgomery County for more than 20 years. Ellen Letourneau lives and works in the Agricultural Reserve, where she is an event planner, weaver, and baker. www.bread&beauty.com.

Toddler in Chief
If the drip, drip, drip of the daily news cycle has made you lose track of all the egregious tweets, heinous actions, head-slapping appointments, and cringe-worthy moments of the Trump presidency, Bill Press is here to refresh your memory. For his new book, “Trump Must Go: The Top 100 Reasons to Dump Trump (and One to Keep Him),” Press draws his purpose from the Declaration of Independence: to “let Facts be submitted to a candid world.”

And what a conglomeration of facts he’s amassed! Starting with the president’s constant lies, overt racism, and sexual predation, he moves on to Trump’s obsessive desire to reverse every policy of the Obama administration, with the resulting havoc he’s wreaked on the environment, healthcare, immigration, and gun control. He addresses the president’s “all-consuming vanity,” narcissism, and his cruel belittling of opponents, writing that, as “Toddler in Chief,” Trump is unfit to hold public office.

But Press is only getting started. Of Trump’s cabinet, he writes: “Together, they are, to paraphrase John F. Kennedy’s famous witticism about Thomas Jefferson, the most extraordinary collection of hucksters, grafters, liars, ignoramuses, and right-wing nut jobs that have ever assembled in the White House, with the possible exception of when Donald Trump dines alone.”

Then it’s on to foreign policy, where Trump has “recklessly proceeded to rescind scores of treaties, scuttle longtime alliances with our closest allies, reject diplomacy in favor of military threats, and alienate almost every other nation on the planet, friend or foe.” As Press resignedly notes, “[H]e’s Donald Trump. He has never missed a chance to be an asshole.”

Press’s list is comprehensive, well-researched, and thoroughly annotated. As he admits, though, “Trump Must Go” will no doubt be obsolete as soon as it’s published since Trump is unlikely to change his behavior. So Press invites readers to add their personal reason(s) why the country must remove Donald Trump from our nation’s highest office “before he does any more lasting damage.” Go to billpressshow.com and click on the link “Trump Must Go.” Please hurry.

Bill Press is the host of The Bill Press Show, simulcast on Free Speech TV, as well as the popular Talk of the Hill series at the Hill Center.

Literary Hill News
Hill journalist Carol McCabe Booker was in the news recently when a statue of Alice Dunnigan was unveiled at the Newseum. As editor of “Alone Atop the Hill: The Autobiography of Alice Dunnigan, Pioneer of the National Black Press,” Booker brought to light the accomplishments of the ground-breaking Dunnigan, who was first black woman to receive press credentials to report on Congress, the State Department, and the Supreme Court. www.newseum.org.

Congratulations to Hill writer Tom Dunkel, author of “Color Blind: The Forgotten Team that Broke Baseball’s Color Barrier,” who has been awarded a prestigious Public Scholar grant by the National Endowment for the Humanities. He plans to research a new book called “White Knights in the Black Orchestra,” about members of a Nazi resistance group during World War II, scheduled for publication in 2020. www.tomdunkel.com 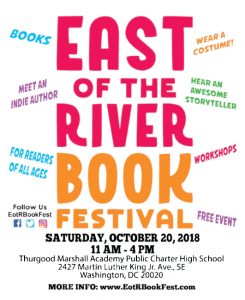 On the Hill in October
East City Bookshop has a schedule of book clubs and readings too full for listing here. www.eastcitybookshop.com/events.

Pesce Too Pop-Up Closed Until September

Have a Ball at Citi Open Taste of Tennis Monday