On Oct. 2, DC Council rejected an amendment put forward by Councilmember Charles Allen (D-Ward 6) to increase the number of days a homeowner is permitted to rent their home on short-term rental sites while they are away.

Council voted Tuesday to approve a bill that would restrict short-term rentals in the District. The ‘Short-term Rental Regulation and Affordable Housing Protection Act of 2017’ would regulate participation in home-sharing sites such as AirBnb to address abuse by commercial operators as well as community concerns about short-term hotels or ‘party houses’ in residential neighborhoods.

The bill prohibits home-sharing of second or third residences. Primary residences, including accessory dwellings such as basement units or carriage houses can be rented by homeowners who will be on site. The host has to be the primary resident and to be receiving the homestead deduction, a tax credit applicable to residential properties occupied by the owner as a principal residence.

However, the act places a 90-day cap on those rentals, called ‘vacation rentals,’ when the homeowner is away.

Allen put forward an amendment that would increase the cap from 90 days to 120. Allen said that he felt the legislation as is “closes the door a little bit more than I’m comfortable with and I think is a little bit too restrictive.” He said the law was especially restrictive for homeowners who are active military, or who work for federal agencies and may be sent out of the District for months at a time.

“I think that extra month gives the flexibility for a lot of our homeowners and residents who leave the District for a short amount of time,” Allen said in putting forward the amendment. “The reality of that marketplace is just that it’s very difficult to find a three-month renter or a four-month renter.”

Allen said deeming these rentals a ‘vacation rental’ obscures the reality for many residents who have to leave the District for a period of several months or more due to their work. “I think that this provides just a little more flexibility to people that are deployed out, that are detailed out, rather than having a vacant property sitting on the block,” he said.

In explaining why he did not support the amendment, Chairman Phil Mendelson (D) said that the 90-day limit was used by many cities, such as San Francisco that were struggling with affordable housing availability. Mendelson said he was not prepared to raise the limit, noting that the bill as introduced had a 15-day cap.

Councilmember Kenyan McDuffie (D-Ward 5), who introduced the legislation, urged his colleagues not to support the amendment. “What we’re doing today, the underlying bill, is really consistent with what I think is evolving into a best practice of jurisdictions across the country,” he said, noting that New York, Boston and San Francisco all had similar limits.

“There is some data out there as well that suggests that when you get beyond that 90-day point, it incentivizes commercialization,” McDuffie added, noting that this has an impact on neighborhoods when homes are essentially converted into hotels.

Councilmembers Mary Cheh  (D-Ward 3) and Brandon Todd (D-Ward 4) spoke in support of the amendment, saying that regulation was necessary but that the bill as written was too restrictive. Cheh said she had heard from constituents who opposed the bill.

“Some of the folks, particularly if they’re older, they want to use the extra money [earned from short-term rentals] to be able to stay in their homes, and it’s important for them to have that supplementary income,” Cheh said. She added that she was hoping to see an increase in the permitted number of days and also to allow for a ‘plus one,’ which would permit short-term rentals at another residential unit.

“I’ve also heard from Ward 4 residents that don’t like the government to tell them what to do with their homes,” said Todd, adding that he was hopeful that changes could be made before the second reading of the bill.

On a post to his Facebook page Wednesday, Allen said that the bill moves in the right direction, but said that he was concerned the bill places too many restrictions on homeowners and limits options for larger families to have access to short-term rentals, as it would take homes off the market for the majority of the year.

“While I voted for the bill in our first procedural vote, I’d like to work with my colleagues on a few changes between now and the second vote in two weeks,” Allen wrote. 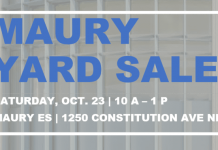