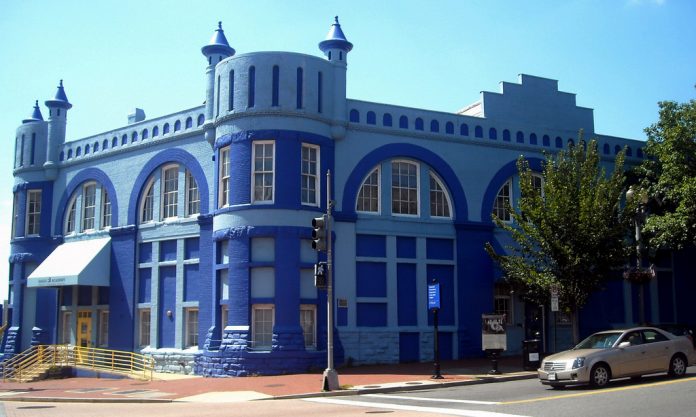 You may have wondered about the large blue building standing in the Navy Yard at 8th and M streets SE. What is its purpose and when was it constructed? Often referred to as the Blue Castle, it has an interesting and important history.

The Blue Castle, located across from the Navy Yard main gate, is an historic building that was added to the list of the U.S. National Register of Historic Places on November 14, 2006. Built with a permit dated 1891, and designed by Kansas City architect Walter C. Root, who was the younger brother of John W. Root, of Burnham & Root, it was created in the Romanesque Revival style. The Blue Castle (also known as the Washington and Georgetown Railroad Car House or the Navy Yard Car Barn) was the terminus of the city’s first (and most important) streetcar line that ran along Pennsylvania Avenue from Georgetown to the Navy Yard. The building was used to turn around the cars and ready them for their next trip across the city.

The Washington and Georgetown Railroad was founded in 1862. The horse-drawn railroad ran two major lines through DC: one on 7th Street, SW north to Boundary Street (now Florida Avenue) and one from 8th and M Streets, SE up to Pennsylvania Avenue, then along Pennsylvania all the way to Georgetown. On March 2, 1899, the DC Appropriations bill required that cable cars change from the horse-drawn carriages to power carriages run by batteries, underground electrical wires, or underground cables. The Washington and Georgetown Railway chose to go with underground cables, and built a power house at 14th and E, NW. On April 7, 1890, the first cable car began operating on the 7th Street line. On September 13, 1891, the Sunday Herald reported that a building permit for a two-story brick car house had been issued. The newspaper also stated that the new car-house “will be the finest structure in the vicinity.”

When streetcars moved from cable to electric in 1897 the Navy Yard Car Barn was used as storage and then later became a bus garage. It is the only Washington and Georgetown Railroad Company building to survive the cable car era and one of the reasons it was admitted to the National Register of Historic Places. 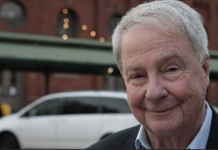 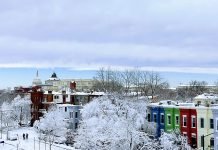 Galley Kitchen Gets an Update