“The cat saved my life, seriously,” said Abena Disroe. “Otherwise, I don’t know what would have happened to me.”

Disroe was asleep on the couch in her apartment at the Hopkins Apartments (1430 L St. SE) last Friday, August 31, when she woke to the cat clawing at her chest and neck. Unable to see anything, she stood up, only to inhale thick black smoke. Disroe realized her apartment was on fire and escaped the apartment only to return for the cat when she realized it had not followed her.

“I know it’s a stupid thing, but I’m thinking, the cat saved my life,” she said.

Update Working Fire 1400 block L St SE. #DCsBravest have extinguished heavy fire 4th floor Apt. Checking for extension. Have made some rescues and sheltered others in place. Status of patients to follow. pic.twitter.com/xa8XHCyULv

DC Fire and Emergency Medical Services found her unconscious, lying with the cat in a stairwell. She said paramedics told her afterward that they had to revive her twice. Disroe doesn’t remember much of it, but she can still feel the after-effects in her ribcage. She said people tell her she is lucky that her ribs were not broken when paramedics pumped her chest during their rescue efforts.

The cause of the fire is still undetermined, and the investigation is ongoing. The fire completely gutted Disroe’s apartment and displaced tenants in four others. Neighbors have established a GoFundMe campaign to help the victims rebuild.

‘Are these your grandchildren?’

Disroe is the President of the Hopkins Resident Council. A resident in the complex for over four years, she has spearheaded programs to contribute to the growth and strength of the community. Shortly after moving to Hopkins, Disroe and a team of children from the community started meeting Sundays as the ‘Green Clean Up Team’ to pick up litter in the neighborhood. “Then they ended up going to church with me,” she said, “and the church members said, ‘are these your grandchildren?’”

In partnership with the 11th Street Bridge Project and the University of District of Columbia (UDC), she piloted a Hopkins Community Garden Project, located at 1025 13th St. SE. The garden boxes were painted by groups of children with the assistance of an international artist and are the latest of her efforts to provide positive activities and health habits in the community.

Interested in using the food grown there to provide a free summer meal program to the children, Disroe took the food handling certification. Convinced that the certificate was a leg-up for the community in getting employment and starting their own food service businesses, she convinced UDC to offer food handling classes free of charge to Hopkins residents. Applicants with the licenses are often given hiring preferences for restaurant jobs, so it was a win-win, she thought.

“You got to do things like that to see who the people are who really want to do something,” she said, “instead of saying they’re not going to come.” Disroe said 21 people arrived early for the 20-seat class, and all but one passed the exam.

Disroe saw her life go up in ashes, losing her home and all of her possessions. She lost her collection of African art, her classic LP records and the gowns she wore in the Classic Woman of the Year competitions (where she was second runner up in 2017). But she really mourns the loss of irreplaceable items such as photos of her great-great grandparents and baby pictures of her two children, now grown. She had wanted to show her future grandchildren a particular video taken as her daughter, now a 24-year-old college student, cried as she encountered snow for the very first time. “How scared she was,” Disroe remembers. “I had to take her back in.”

Some losses impact her future plans as well as her past memories. She is engaged to be married but lost her wedding dress in the blaze. “Each bead was intricately sewn into the dress,” she said. The wedding was set for later this year, but she says it may now have to be delayed.

However, she has more immediate needs. “I need a home,” she said, when asked to enumerate them. “Yes. This was my home, and I have a lifetime of memories that I collected, as I thought I was safe and secure. I was home and how I’m homeless.”

“A safe, secure home is what I need.”

Hill residents came out to help immediately. Even as the flames were extinguished, residents of L street offered water and snacks for residents and firefighters. Now they want to help those effected by the fire to rebuild in the wake of the destruction.

Kelly Waud is a Commissioner with Advisory Neighborhood Commission (ANC) 6B who knows Disroe from the work she has done to help to build the community. Now, Waud is asking the community if they can help Disroe rebuild her life.

Waud started the GoFundMe campaign to help Disroe and the three other families displaced by the fire.

‘I know Ms. Abena from my work at the ANC representative for 6B07,” Waud wrote on the campaign page. “She’s a dynamo – kind, energetic, and positive; and she’s been working closely with the 11th Street Bridge Park to establish a community garden and develop programming to help the health and well-being of her community.”

“She has such a positive energy, and has been so welcoming and supportive of the ANC,” said Waud.

For now, Disroe is living in a hotel and wearing clothes given to her by friends. She is focused on what is most important: rebuilding her health, and rebuilding her life. Her fiancée has asked her to please rest for an entire day, but Disroe has gone out daily to do the work she needs to do to get back on her feet.

“I really don’t know what to expect from day-to-day right now,” she said.

You can contribute to the GoFundMe campaign to assist Disroe and her neighbors by visiting the website at https://www.gofundme.com/hopkins-fire?member=696164. Any amount is welcome.

“No donation is too small to someone who has to replace everything,” said Waud. 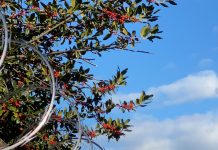