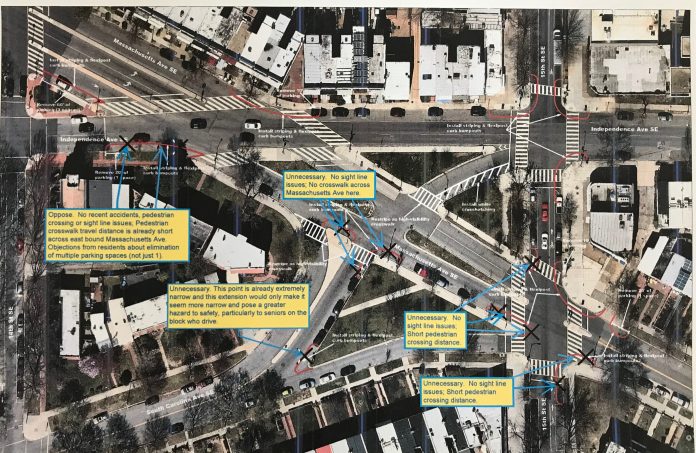 Community Speak Out
Hill East resident John Ten Hoeve said that he was hoping to work with neighbors to get the District to fence in the park at the corner of 18th Street and Massachusetts Ave SE. He said that he and his neighbors were concerned about the amount of traffic around the playground and the safety of children playing there. He wants it considered for the next budget year. He is also concerned with access to the Anacostia River Trail from 17th Street SE through the development under construction on the site of Reservation 13. Residents interested in working with him should contact Commissioner Daniel Ridge (6B09) at [email protected], who will announce a community meeting about the park in August.

Commissioner Announcements
Commissioner Ridge announced that ANC 6B has a new Twitter account. The handle is @ANC6B.

Ridge also said that Century Associates, the chosen developers for the Boys and Girls Club building (261 17th St. SE), was having a difficult time negotiating land disposition with the city. Although ground breaking had been anticipated within the year, it was now not clear when that would happen. Ridge said the developer had only been allowed access to the site once or twice.

Planning and Zoning (P&Z) Committee
Chair Nick Burger (6B06) asked the ANC to support a letter to Councilmember Charles Allen (Ward 6-D), the Office of the Mayor, the Office of Planning and the Historic Preservation Review Board (HPRB). The letter asks Council to work with the relevant offices to review the historical designation process, clarify the role of the ANC and of community support or lack of support therein and do so before additional designations are approved by HPRB.

The letter expresses concern with the process of historic designation as it played out in the case of Kingman Park, specifically as it considered the majority of resident preferences and the position of relevant ANCs. The letter notes that public accounts indicate that one HPRB representative appeared to indicate to an ANC Commissioner that the latter should convince the neighborhood to support the designation. “This view fundamentally upends the role of the ANC,” says the letter.

After some discussion about the length of the letter and to whom it should be addressed, it was supported 5-1.

Transportation Committee
Jayaramand discussed a letter to DDOT regarding a Notice of Intent (NOI) 18-98 regarding the intersection where Massachusetts, South Carolina and Independence Avenues meet 15th Street SE.

Jayaraman said he opposed elements of the NOI, which calls for installing flexi-posts and striping to bump the curbs out at intersections at Massachusetts and Independence Avenues SE, along 15th Street SE, and where South Carolina meets Massachusetts Avenue SE.

The narrowing of the streets in this manner is intended to improve intersection sight distance and shorten pedestrian crossing distance. Jayaraman said many of the changes would not accomplish these goals but would add unsightly flexi-posts to the intersection and waste District resources.

The Commissioner opposed the extension of the curb on the south side of Independence Avenue at Massachusetts, arguing that there were no pedestrian safety issues but a cost in parking spaces. He said the extension of the triangle park between South Carolina and Massachusetts Avenue SE would narrow an already narrow street and become a safety hazard.

He said the timing and length of traffic signals at these intersections was more important, as drivers accelerated in order to get through in the time allotted.

He said he did support the modifications at Independence Avenue and 15th Street SE, near the 7-Eleven (1501 Independence Ave. SE), where cars often park illegally to access the store.

The Commissioners generally deferred to Jayaraman’s knowledge of the area but voiced some concerns.

Burger said he generally approves of curb bump outs because the narrowing of the road tends to make drivers slow down. He also opined that any work on intersections done with pedestrians in mind was a necessary rebalancing in favor of pedestrians over vehicle. “I think as an ANC we might think about being a little forward-leaning when it comes to these things. If we’ve got DDOT willing to come out and do work to make our streets and our crossing more pedestrian friendly, I think we should be looking for ways to do that as much as possible.

“If that means losing some parking, then we lose some parking,” he added, noting that residents would have to balance a desire for parking availability with their desire for pedestrian safety.

The Commission approved a letter thanking DDOT for proposing traffic calming measures in Hill East, noting that they supported many of the measures and objected to some for specific reasons. The letter was supported unanimously, 6-0-0.

Oldenburg noted that Johnathon Rogers of DDOT had provided her with an update on progress on the Southeast Boulevard project, saying they would not meet their July deadline to draft.

Hill East Task Force
Ridge reported that Department of Public Works (DPW) Deputy Administrator of Parking Enforcement Johnny Gaither had briefed the residents on parking. He reported that there was no agreement between Events DC and DPW for large events at Robert F. Kennedy (RFK) Stadium. Representatives from Events DC agreed to raise the idea of such an agreement with their leadership.

When asked for a breakdown of the 1246 parking citations issued in Hill East in the first half of 2018, Gaither said he had been advised to ask HETF to make a Freedom of Information Act (FOIA) request for the information. Ridge pointed out that a resident member of the Transportation Committee had found the data publicly available on a District website. HETF had nonetheless placed a letter making the request on the Consent Agenda.

Ridge also noted that the District will receive over $8 million as a result of the Volkswagon emissions settlement. The money will be spent on new locomotive switchers for Amtrak at Union Station and electric and natural gas buses and trash trucks that serve communities that are adversely affected by air pollution (Wards 5, 7 and 8).

As Advisory Neighborhood Commissions (ANCs) DO NOT MEET IN AUGUST, the next meeting of ANC 6B will take place at 7 p.m. Tuesday, September 11 at the Hill Center at the Old Naval Hospital (921 Pennsylvania Ave. SE). Visit anc6b.org for more info, or find @ANC6B on Twitter

J&J Pause Has Only Slight Effect on DC Vaccinations

A Breakout Year for Clean Decisions