There were fewer issues than anticipated with transportation and crowds in the neighborhood around Audi Field (100 Potomac Ave SW) at DC United’s inaugural game Saturday night. That’s the conclusion reached by a Southwest Business Improvement District (SWBID) analysis of the scene.

The report is based on observations by 17 SWBID Ambassadors stationed at locations from M to P Street SW and from South Capitol to Fourth Street SW. Ambassadors were tasked with providing a welcoming and informative presence as they watched and recorded what they saw, especially noting traffic and pedestrian flow. The report was shared with District Department of Transportation (DDOT) and other stakeholders to use in future planning.

“It’s based on the observations of our Southwest Team Ambassadors throughout the day,” said SWBID Director of Research Patrick Revord. “We’re just taking a look at what happened and seeing how well it went the first time, and then using that knowledge to make some suggestions for the future.”

The report was also delivered as a response to community concern. With thousands expected to travel to and from Southwest for games through narrow, difficult-to-maneuver streets, neighbors were concerned about ease of movement as well as potential noise and activity in the neighborhood.

It was also a chance for the BID to collect data to keep abreast of how events transpired on an evening when over 20,000 people visited Southwest for the DC United game alone. “It was not just for the sake of knowing,” said SWBID Executive Director Steve Moore, “it was also to help people in the neighborhood understand, ‘here’s what’s happening around you.’”

Thousands of fans came and went, many using metro rail; ambassadors estimated about half exited at Waterfront Station and half at Navy Yard. More than a thousand people walked to the stadium, with foot traffic peaking at 7:15 p.m. Departure was equally smooth with the crowd largely dispersed by 10:45 p.m., 35 minutes after the game ended.

Ambassadors also said a visible police presence helped ensure that the neighborhoods south of M were relatively quiet. Some residents did not even know the game was ongoing, although others complained that they could hear the opening concert, featuring local band White Ford Bronco, from their homes.

Ambassadors reported some concerns. Drivers seemed to be confused about the location of the site set aside for rideshare pick-up/drop-off, instead using spots throughout the neighborhood. This was complicated by poor cell service in the area which prevented people  from consulting with transportation apps such as NextBus, Bikeshare and ridesharing apps such as Uber and Lyft. Nonetheless, a single Ambassador counted 516 ride-share drop offs and pick-ups at one intersection, First and P Streets SW, reflecting wide use of the service and the popularity of that location.

Interestingly, although Metrobus route 74 traveled directly to Audi Stadium, few soccer fans took the bus. Ambassadors observed more residents than fans disembarking the 74, which travels between Convention Center and Nationals Park, possibly reflecting more fans traveling from Maryland and Viriginia. Ambassadors reported that more than half of vehicles passing through the neighborhood had Virginia tags, with Maryland and DC splitting the remainder.

Observations of What is Going on Where People Live

SWBID Executive Director Steve Moore said that the debriefing was an important contribution to neighborhood growth, at the same time as it provided useful feedback to District agencies.

Moore said he hoped that the feedback could be used to improve planning around special events in the Southwest neighborhood, which have grown tremendously in number over the last few years.

“A neighborhood growing as quickly as Southwest really needs people who are watching very closely,” Moore said, “both the numbers of people and the way the neighborhood itself is being used.”

The SWBID has already shared the findings of their Audi Field Opening Debrief report with the District Department of Transportation (DDOT) and has plans to share them with others, including the Executive Office of the Mayor (EOM) and DC United staff.

DDOT Director Jeff Marootian acknowledged the large crowds that came to the weekend’s sports events, which also included those associated Major League Baseball All-Star Week. “It was the job of all District agencies to keep fans, residents, and motorists safe and maintain smooth traffic operations,” he said.

Marootian said that DDOT would continue to encourage the use of multiple methods of transportation, including Bikeshare and a special Circulator route for game days, in addition to ride sharing and the Metro.

”We are conducting an after-action review and are receiving feedback about our transportation operations plan for the area around Audi Field to determine if there are opportunities for changes going forward,” he said.

“I think it’s also important to note who is doing this study,” Moore added, referencing the BID Ambassadors. “We have a team of returning citizens—some just a few weeks out of prison—who are all now collecting data, synthesizing it and contributing to a fairly sophisticated analysis of information leading to a report on the opening of the new stadium in the neighborhood.”

The SWBID Ambassadors also served a wayfinding role in the rapidly-changing streets of the Southwest neighborhood, providing directions to fans on their way to and from the stadium and helping them to locate services, such as restaurants, pubs, bus stops and metro.

At least one ambassador was asked to stay with a fan as she waited for her ride share to arrive, helping her to feel safe in an unfamiliar place. “That’s the message we want to be sending, that’s the service we provide,” Moore said. 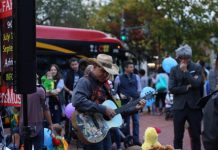 Get the Details: Hilloween 2021 at Eastern Market

Focus on Physicians Over Schools in District Child Vaccination Plans

Get the Details: Hilloween 2021 at Eastern Market

Focus on Physicians Over Schools in District Child Vaccination Plans

The Pumpkin Walk Returns to the Hill