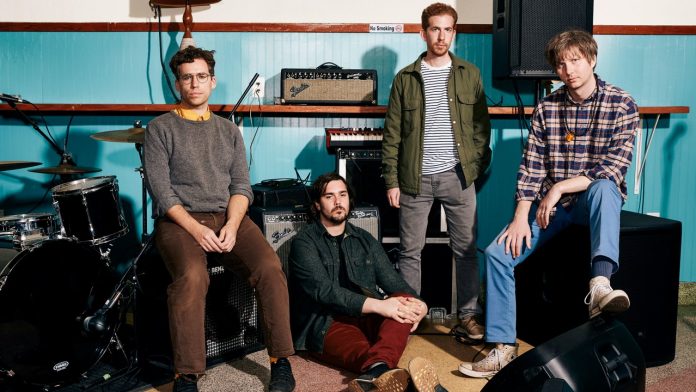 Here I am again for a third time waiting with anticipation for the latest tour of the Brooklyn based band Parquet Courts at the 9:30 Club. The band hooked me back in 2014 with their post punk revival sound. Reminiscent of Wire circa “Pink Flag,” The Velvet Underground and Television, their music is rooted in the past, yet the sound is their own.

To my delight, the supporting act, Goat Girl filled my idle time. These four piece, all girl band from South London is one of NME’s new bands to watch. Putting out playful yet thoughtful music, they won over the crowd with their distinct harmonies and catchy guitar tunes. During a pause midway through their song “Viper Fish,” you could hear a pin drop. The crowd definitely took notice.

Despite the fact that the Caps were playing their championship winning game that night, the venue continued to fill up with loyal fans. The house music created a party vibe, with 80’s selections from Grace Jones and Soft Cell. This warmup music may have something to do with the band’s recent album Wide Awake! produced by Brian Burton, aka Danger Mouse. The record is a change with wildly, danceable punk rock music.

Things kicked off with “Total Football” from the new album. This song was the perfect opener to get their devoted fanbase excited. Andrew Savage shouted his distinct vocals while guitarist Austin Brown and bassist Sean Yeaton provided precise harmonies. This song has more of a punk sound when performed live. The mosh pit immediately formed and the frenzy began.

The band continued the fervor with “Almost had to Start a Fight/In and Out of Patience” which flowed into “Freebird II.” Sung back to back as on the album, the first song got the crowd to explode, jerking their bodies into each other. As the band bellowed out the lyrics, Sean Yeaton violently shook his head back and forth in rhythm with the bass.

The next song brought the crowd back down. Savage wrote the song about his mother, who struggles with homelessness and substance abuse. Despite the depressing theme, the song celebrates a son making his way in the world as he sings the final verse:

The concert continued with highlights from the band’s back catalog, including two heavy punk hitters “Master of My Craft” and “Borrowed Time” from their 2012 effort, “Light Up Gold.” These unrestrained early post-punk songs, delivered their one-two punches in an exhilarating fashion.

One of the most animated moments of the evening, was performing the title track “Wide Awake.” A guest drummer appeared with a single snare drum ornamented with cowbells that provided the underlying beat to the song. Brown blew a syncopated whistle to add to the chaos. The dance tune is built around a simple hook that stays in your head well after you leave the show.

The band saved their most melodic laid-back song “One Man, No City” from 2016 “Human Performance,” for the end of the set. A catchy repetitive guitar riff and loping bass combines with a conga beat will cause any ‘mosher’ to stop and enjoy the groove. However, expect the unexpected when the band stretches the tune into a psychedelic freak-out.

Parquet Courts have matured since their inception eight years ago. The punk influences are there with hard-edged melodies. However, there is a sophistication, as the boys experiment with tempo and instrumental harmonies. The band has developed a serious following, one that spans multiple generations who appreciate their experimentation with garage and early-’70s art rock. This exploration of fresh sounds and spontaneity will certainly take this writer along for the ride.

New Films from England and Romania