Metropolitan Police Department (MPD) First District officers are looking for help identifying a suspect after a Robbery that happened Friday, June 15 on the 300 block of Pennsylvania Avenue SE.

At around 2:56 a.m., a man was walking down Pennsylvania Avenue when he was approached by the suspect who assaulted the man and stole his property.

The theft fled the scene on foot. The victim was transported to a local hospital for treatment of life-threatening injuries.

The suspect was captured by a nearby surveillance camera and can be seen in the photo above.

Anyone who can identify this individual or who has knowledge of this incident should take no action but call police at (202) 727-9099. You can also text your tip to the Department’s Text Tip Line at 50411.

Crime Solvers of Washington DC offers a reward of up to $1,000 to anyone who provides information that leads to the arrest and indictment of the person or persons responsible for a crime committed in the District of Columbia. 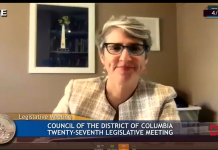