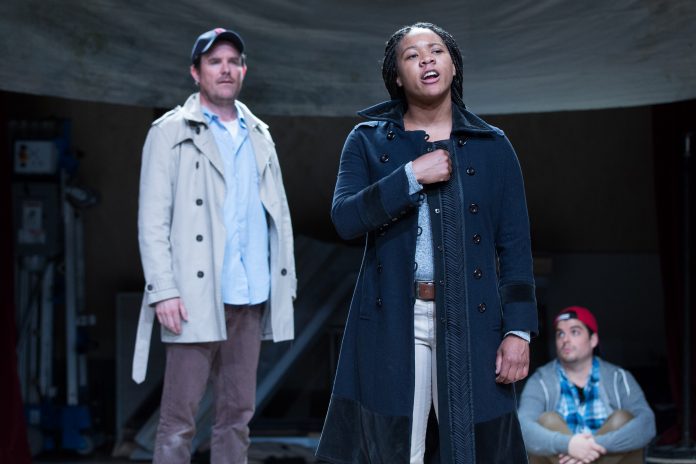 At the end of her trial, there is only Joan.

The house lights, unlike during most of the show, are down, and a spotlight gently washes her face, her tears, as she looks up. She sits on a grey chair, above a table, and the three other cast members of Bedlam’s production of Saint Joan at the Folger Theatre, who play the other over a dozen characters, remain in the audience—only their voices are left.

From the balcony, the Archbishop speaks: Joan is guilty. First, of intercourse with spirits, the voices of God she claims to hear, making her a sorceress. Second, for wearing a man’s clothing. The two are seemingly treated with similar gravity. “If I were to dress as a woman, they will think of me as a woman,” Joan pleads.

Joan’s dress—her womanhood—punctuates these many men’s views of her. They compare her clothing to nakedness in scandal, it’s one of the reasons she faces the fate she does. She’s tried as a witch. To Sam Massare’s commanding Archbishop, Joan is “proud and disobedient,” and it is unclear which he finds worse.

The three other actors play all of the men in the show—The Archbishop of Rheims, an army captain, a trusty friend, The Earl of Warwick, the Earl of Warwick’s chaplain, for instance. They dive in and out of characters, transitioning even during scenes, even with one another. Newly crowned King Charles Duphain VII introduces himself by chucking off his New Balances and green ski mask. If gratuitous at times, the changes are often so seamless they come undetected, actors shedding any remnants of past characters they played like they are being possessed by another spirit.

Dria Brown is only Joan—radiant, courageous, bold, inexperienced, naive. She feels nineteen, sometimes even younger, enveloping the audience into a world through her eyes. Joan exists in a world of faux transience, where the men around her are allowed change and grow, shift identity, make mistakes, regret them later, but she is eternally bound to a single self. Even beyond the margins of the stage, the audience will often know of her, too—her 19 year old self—before they arrive to the show.

Joan does not have the privilege to be anyone but herself—condemned for speaking like she knows what’s right, rebuked for her pride. Even in their difference, in their varying progressiveness, even in their varying allegiances—to the church, to the crown, to the French secular state—those around her are uniform, unprepared for a woman, a nineteen year old woman, to rule, to wear a man’s clothes, to fight a man’s war, to lead a man’s world. It’s only Joan, in a world of men, who even in great number, feel one and the same. This is to say, it’s familiar.

The play is stripped down to four actors, but Eric Tucker’s set feels loud—it’s crafted through characters’ words and actions and on and off stage audience reactions. We see the wind through Lewis’ bubble-blowing, characters change spatial dynamics in how they sit on naked chairs. A squire chases his steward in circles on and behind the stage. A white cloth hangs as a backdrop.

Some audience members sit on stage, chairs changing positioning at each intermission. There are two. The play is long, as Tucker jokes at the start and end. The play, however, rarely lags.

The actors dress in modern outfits—our titular Joan of Arc begins in Adidas and a summer dress—artfully juxtaposing with the language of Shaw’s 1923 book.

In the final scene, after an epilogue that comes as King Charles’ dream, with lights facing the ceiling and actors speaking from the audience, once again, only Joan is left on stage. The small theatre is lost—Joan will be remembered but is still unwanted.

The world wasn’t ready for her.

Saint Joan is at the Folger Theatre, located at 201 E Capitol St. SE, through June 10.

Two Films from Real Events: One a Hijacking Suspenser; the Other a...

Beauty and the Beat