The crime blotter returns after a short hiatus occasioned by the paternity leave of writer Elizabeth O’Gorek. Any questions or comments should be directed to [email protected]

At around 5 a.m. Sunday, May 20, a citizen called the Metropolitan Police Department (MPD) to report sounds of guns shots in the 1900 block of Capitol Avenue NE.

MPD Fifth District officers responded to the call for service. Upon entering an apartment building unit they found an adult male suffering from several gunshot wounds to his torso.  DC Fire and Emergency Medical Services (FEMS) responded but were unable to revive the unidentified man.

Anyone who has knowledge of this incident should please contact the First District Detectives Unit at 202-299-2025, or the Command Information Center at 202-727-9099.  Additionally, anonymous information may be submitted to the department’s Text Tip Line by sending a text message to 50411.

MPD offers a reward of up to $25,000 to anyone who provides information that leads to the arrest and conviction of the person or persons responsible for any homicide committed in the District of Columbia.

Members of the Fifth District Crime Suppression Team (CST) recovered a Daisy Power line BB Gun during the course of a traffic stop on Sunday, May 20 at 9:14 pm on the 1700 block of Benning Road NE.

The driver of the vehicle was subsequently placed under arrest for Possession of a BB Gun on Public Space and driving without a permit.

At 3:48 a.m. Saturday, a woman was arrested on the 1900 block of Massachusetts Ave SE on charges of Threatening to do Bodily Harm.

At 1:40 a.m. Sunday, a man was arrested on the 1200 block of Half Street SE on charges of Threatening to do Bodily Harm.

At 4:06 a.m. Sunday, there was an assault with a dangerous weapon on the 1200 block of Bladensburg Road NE. 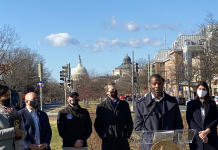 Stakeholders Give Views on Future of Closure of Seventh Street SE...