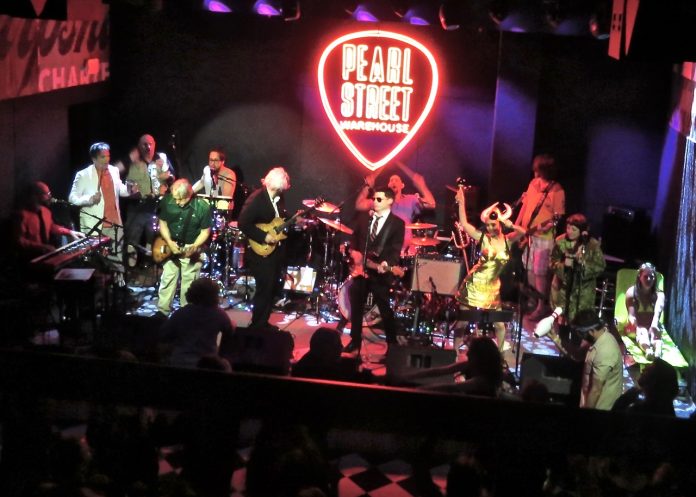 With White Russians flowing and costumes adorning, The Pearl Street Warehouse celebrated the 20th anniversary of the cult classic, “The Big Lebowski,” with an interactive immersive musical experience. Musicians from more than a dozen DC bands participated in last week’s impressive display by playing the breadth of musical genres and artists represented in the film and embracing their inner Lebowski. The Dude, Jesus Quintana, Viking Dream Maude, Artist Maude, Jackie Treehorn, Bunny, Walter, The Stranger and a nullifying collective of Nihilists were all on hand to ensure—in the wise words of The Dude himself—the night was “strikes not gutters, ups not downs.”

Twenty years after its initial lukewarm reception, the Coen Brothers’ film, “The Big Lebowski,” can boast a dedicated cult following, rivaling that of “The Rocky Horror Picture Show” and “This is Spinal Tap.” Like many films exploring the anti-hero as hero, The Big Lebowski, through its self-assured and entirely authentic protagonist, The Dude, provides an antidote to the hyper economic ladder climbing and hawkish political climate of the time. With his palpable disregard for societal norms, an explicit lack of self-damning moral scrutiny and a blatant, unapologetic, lackadaisical attitude concerning others’ expectations, Jeffrey Lebowski embodies the kind of Everyman who exists beyond the confines of most folks’ everyday reality.

Chris Brown of The Ron Holloway Band, who played Jesus Quintana and served as musical director for the performance, should be heartily commended for his theatrical feat. Pearl Street Warehouse erupted in song, playing through the film’s varied and purposeful soundtrack. Reminiscent of the role of the chorus in ancient Greek theatre, The Big Lebowski’s soundtrack functioned as an emotional and instructive guide for the film’s action.

The appreciative fans at Pearl Street Warehouse definitely did abide, and the heart and soul Jeffrey Lebowski’s memorable “dudeness”—celebrated by both artists and audience…..is really just what tied the whole performance together.