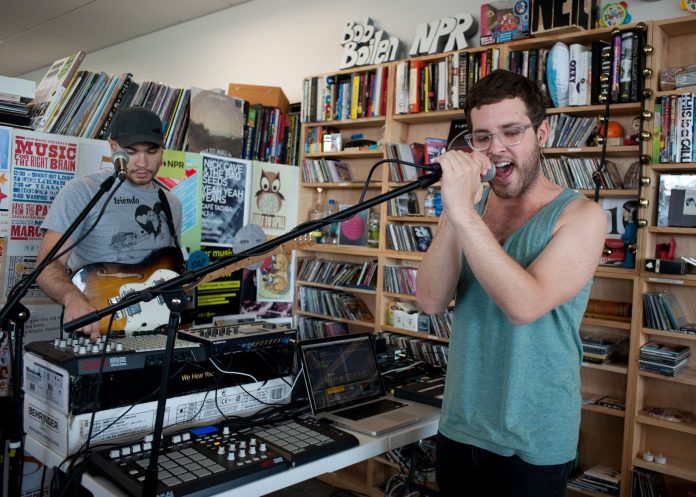 A raw one woman show kicked off the night with California native Sasami. Relying on a single electric guitar, she created an unexpectedly pleasant atmosphere of warmth. She used her time onstage to be emotionally vulnerable and sang mysterious songs embedded with personal history. The next group to perform was a shoegaze inspired female group heavy on electric guitars and vocals.

Will Wiesenfeld of Baths rose above the emotional lull from the previous acts. Opening with a few of his most dynamic tracks, such as ‘’Lovely Blood Flow’’ from his first album, he also played new songs from his latest work.

Entering the music scene with “Cerulean,” Wiesenfeld’s sound was reminiscent of early 2000s bubbly indie pop. The album illustrates his strength in electronic experimentation. It does not use lyrics as much as vocal ambience, because it is unnecessary. Wiesenfeld’s ability to exist outside the popular realm of genres has given him a gift of ambiguity and space for future artistic metamorphoses.

Wiesenfeld is doing something that few other artists are doing. He strays from traditional electronic style and consistently mixes and matches concepts. Though it may not be intentional, his vocals often seem to distantly echo away from the foundational electronic landscape he creates because they contrast from each other so strongly.

The tracks are unpredictable and never boring. Each is like unearthing a new discovery. His albums have split personalities. An example of this versatility is his 2013 “Obsidian,” which reveals a shadowy side to his typically animated sunniness.

It’s hard to say where Wisenfeld’s influences stem from. While drawing style that sounds like Bibio or The Postal Service, his vocals are akin to other works from the same era such as Toro y Moi. With his new material, he is moving into a more vocal territory, particularly the most recent “Romaplasm,” which reads like a diary.

The Baths April 21st performance transformed the U Street Music Hall into an intimate bedroom with the audience dancing along.

Wiesenfeld poked fun at the crowd, pointing out their unique musical knowledge. Over time Baths has created a solitary boldness of work. Wiesenfeld has reached depths through taking risks that other artists would shy from. No matter what Wiesenfeld is working on, he is certainly doing it in his own way.

Rebekah is a Capitol Hill-born, DC native raised on Eggo waffles and Britpop. She graduated from The Evergreen State College where she learned how to listen to trees. She enjoys cult horror and fixing old cars. Visit her blog.