“Nowhere else in this great country, with its uncounted towns and cities, unlimited wealth, and immeasurable territory extending from sea to sea, could conditions be found more favorable to the success of this occasion than here.” So said Frederick Douglass in his speech at the first Unveiling of The Freedmen’s Monument at the center of Lincoln Park on April 14, 1876. And he said it again in the recreation of that ceremony that took place Monday as part of the National Park Services (NPS) Frederick Douglass Bicentennial celebration.

On April 14, 1876 Emancipation Day was celebrated at Lincoln Park. The celebration included a keynote address by Douglass delivered before a crowd of 20,000 people, and the unveiling and dedication ceremony for the ‘Emancipation Statue’ featuring President Abraham Lincoln that still stands in Lincoln Park today.

In remarks delivered prior to the ceremony, NPS Ranger Vince Vaise noted that the funding drive for the statue was initiated by a five-dollar donation from a former slave named Charlotte Scott, then living in a refugee camp in Wisconsin. According to the plaque affixed to the statue, the “Freedmen Statue,” was funded entirely by African-Americans, many of them Union Veterans.

The statue has been the subject of controversy virtually since it was unveiled. While attending the ceremony, Douglass was reported as saying that the statue “showed the Negro on his knee when a more manly attitude would have been indicative of freedom.” Although the figure represents a freed slave, he is depicted shackled to the base of the statue. An alternative pose, where the African-American held a rifle, was considered and rejected.

The D.C. Compensated Emancipation Act of 1862 that ended slavery in Washington DC freed 3,100 individuals, reimbursed those who had legally owned them and offered the newly freed women and men money to emigrate. The legislation and the courage and struggle of those who fought to make it a reality is commemorated every April 16 on DC Emancipation Day. In the late nineteenth century, the celebration often took place on the date of the assassination of Abraham Lincoln, April 14, as did the statue’s dedication in 1876.

The afternoon program featured family-friendly activities such as leaf shading, a puppet show and a chance for young Union recruits to practice drills on the park green, featuring wooden rifles and a bayonet charge. At a ‘build your own monument’ table, one parent-child team built an impressive clay model of the Jefferson Monument.

The Federal City Brass Band performed a concert of original Civil War era music. The band uses Civil War era instruments, playing 150-year-old brass instruments. During the concert, Head Musician Jari Villanueva introduced one song, ‘Lorena,’ as one of the most popular songs of the Civil War. A ballad, Villanueva said that the song was so sentimental that officers blamed it for desertions, saying the tune made soldiers homesick. It was therefore rearranged into a march, he said, so that soldiers could move in formation as they heard the tune.

An open discussion about the “Emancipation Statue” and its meaning took place at 5:30 p.m., prior to the unveiling.

In his introductory remarks Ranger Vaise said that during the Civil War, the park was the location of Lincoln Hospital, providing care to many Union soldiers. By the time of the statue’s dedication, Lincoln Park was the epicenter of Emancipation Day celebrations. Park rangers had found a copy of the original program in the National Archives. That schedule included the speakers, proceedings and music played at the event.

Vaise said that “twenty thousand people were in the original audience, including African-American and white residents of Washington, DC and hundreds of what were then known as colored Union veterans.”

For the 1876 ceremony, the entire Supreme Court was present on stage, as well as then-President Ulysses S. Grant, acting President of Howard University and later Representative for Virginia’s fourth District John Mercer Langston, and keynote speaker Frederick Douglass. Some 150 people braved the chill in 2018 to watch the recreation of the ceremony, which followed the 1876 program to the letter.

After ‘Hail Columbia’ was played as the national anthem by the Federal City Brass Band (the ‘Star Spangled Banner’ was not officially the anthem until 1931) Massachusetts Congressman Nathaniel Banks read the Emancipation Proclamation. After remarks by John Mercer Langston, President Grant pulled the cord to reveal the Freedmen’s Statue.

The keynote address was delivered by Frederick Douglass, who had met and corresponded with Lincoln on several occasions. In his remarks, Douglass pointed out the mixed-race audience, saying that “Harmless, beautiful, proper, and praiseworthy as this demonstration is, I cannot forget that no such demonstration would have been tolerated here twenty years ago.”

Douglass did not mince words in his address, however. He said of Lincoln, “He was preeminently the white man’s President, entirely devoted to the welfare of white men.” To the white members of the audience, Douglass said, “You are the children of Abraham Lincoln. We are at best only his step-children; children by adoption, children by forces of circumstances and necessity.”

“Knowing this, I concede to you, my white fellow-citizens, a pre-eminence in this worship at once full and supreme.”

Douglass acknowledged that it was necessary for Mr. Lincoln to be primarily the white man’s president in order to eliminate slavery, saying “Had he put the abolition of slavery before the salvation of the Union, he would have inevitably driven from him a powerful class of the American people and rendered resistance to rebellion impossible.”

At the conclusion of the ceremony Ranger Vaise led a flashlight tour exploring “The Secret Allegories of the Statue,” which looked at hidden secrets about the statue and the symbols and icons in our neighborhood park. 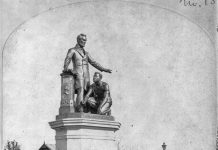 Let Us Heed the Words of Frederick Douglass on the Emancipation...