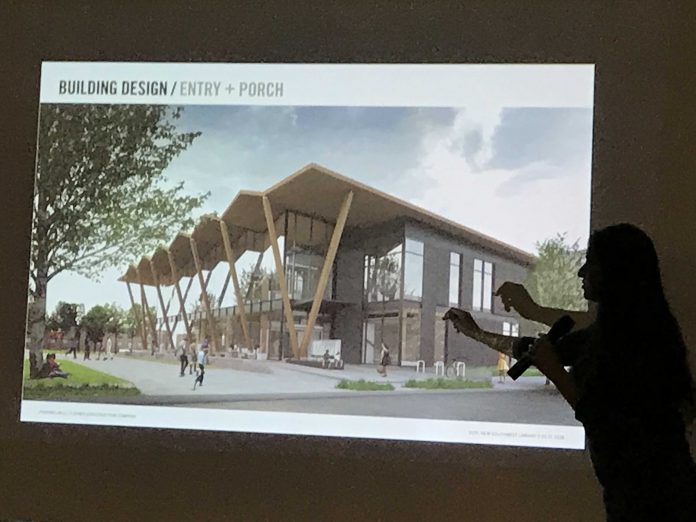 Waterfront Station
After a month of negotiations with community members, Forrest City returned to ask the commission for its approval of its development at 375 and 425 M St. These are the final two parcels of Waterfront Station project that replaced the old Waterside Mall. Under the terms of the 2007 first stage Planned Unit Development (PUD), the parcels, currently empty, had originally been slated for office development.

Forrest City had presented plans in February to change to a mixed-use development featuring approximately 40,000 square feet of retail, a 6,000 square foot community center, and about 585 apartments and 399 parking spaces. Eight percent of the residential square footage would be affordable housing at 60 percent of Average Median Income (AMI) including five three-bedroom apartments.

The community center would receive 30 years of free rent. Occupying sections of two floors, the center would have a well-defined entrance on M Street SW in the 375 M St. property. This building would include the office space. Addressing community concerns, its parking entrance would be relocated to the access road on the property’s eastern side sited away from the corner to avoid contributing to traffic congestion. All of this would be the subject of a binding agreement between the community and the developer.

Some in the audience objected to the development of the parcels removing space for community activities such as farmers’ and flea markets. Why couldn’t both simply be maintained as green space to form a community commons, they asked. Commissioners stated that this was not an option under the PUD. Residents of a neighboring condo also questioned the developer extensively on the location of the parking garage entrance for the eastern building as well as plans for adjacent sidewalks.

The commission unanimously supported the development subject to the signing of the binding community agreement, providing an acceptable site traffic plan, selecting an operator for the community center acceptable to the commission, and a design for a public art installation in the plaza next to Safeway. It also authorized Commissioners Litsky, Moffat and the chair to testify at the Zoning Commission hearing as well as negotiate all outstanding items with the developer.

Other Issues
MPD Captain Michael Pullian reported that crime in PSA 106 continued to decline this past month. The one exception was theft from automobiles. The captain cautioned the public not to leave visible valuables in parked cars. He stated that Commander Morgan Kane has taken the position that any resources necessary to handle either stadium would not be drawn from the First District’s roster for community policing. He pledged to have his officers write tickets for cars parked illegally near The Wharf. He also promised increased enforcement against dump trucks cutting through residential neighborhoods near the Greenleaf Recreation Center.

There was a presentation by the Office of the People’s Counsel (OPC). The representative stated that OPC opposed the merger of Washington Gas.

There was an update on the new Southwest Library. The Commission on Fine Arts has approved the design, which will be LEED Gold. The new two-story building will have no basement due to its location in the flood plain. It will be surrounded by bio-retention gardens and feature lots of meeting and collaborative spaces. The next hurdle is a meeting of the Board of Zoning Adjustment hearing on April 11.

Deputy Fire Chief Sherrod Thomas gave an overview of the agency’s new “Right Care, Right Now Initiative.” Starting, April 19 residents calling 911 between the hours of 7 a.m. and 11 p.m. for non-emergency medical issues will be routed by the operator to an on-duty nurse who will connect them to a local urgent care clinic scheduling transportation if needed. Transport will be free for Medicaid and DC Alliance members.

There was a presentation on the DC College Savings Plan. The most important new element of the program was that funds saved can now be used to pay private schooling under the terms of the recent Congressional tax cut.

The commission voted unanimously to support: